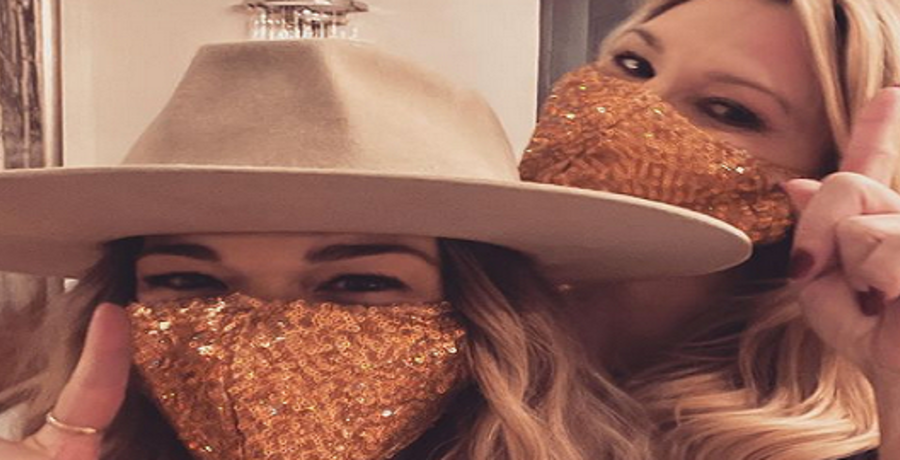 Brandi Glanville and LeAnn Rimes are making amends. The Real Housewives of Beverly Hills star and The Masked Singer Season 4 champ got together for the holidays. Brandi shared a photo of herself with LeAnn on Instagram. Their reunion comes as a shock to fans who are aware of their feud.

Earlier this year, Brandi shared on Twitter that LeAnn and Eddie Cibrian wouldn’t let her see her children. But she’s been hanging out with her boys ever since. And it appears that she’s on good terms with the couple once again. Check out the surprising photo for yourself.

On Saturday, December 26, Brandi Glanville shocked her followers with a rare photo with LeAnn Rimes. Both blonde beauties wore matching gold sequin masks. They also pointed upwards in the selfie. In the caption, Brandi wrote: “Hanging with the best masked singer of all time leannrimes #maskedsinger #sunshine #winner #spitfire #christmas masks by #polatteu.”

The selfie received over 13,000 likes. Fans flocked to the post to share their reactions. Here are just some of the comments:

Unsurprisingly, most fans were in shock. They loved seeing the ladies put their differences together. One user called the selfie “the best picture of 2020.” Others think it’s great that the two are getting along.

Also, Brandi took to her Instagram Stories to share more content. She posted a series of clips of LeAnn singing holiday tunes at the piano. It’s nice to see the two get along, even if it’s just for the holidays. They put their differences aside so they and their blended family can celebrate.

Earlier this month, Brandi Glanville got dragged for her comment about LeAnn Rimes. Some assumed she was dissing the country superstar. LeAnn unmasked herself as The Sun on The Masked Singer Season 4 finale. The RHOBH alum took to Twitter to talk about the episode.

Fans felt the tweet was a diss towards LeAnn. Not only did Brandi spell her name wrong, but she also called the “How Do I Live?” singer a “bonus mom.” Brandi had enough of the backlash, so she returned to Twitter to explain her tweet.

“First of all I did not shade or diss leann rimes I rooted for her to win,” she tweeted. “She clearly told my kids that she’d never do the show to keep things a secret because they have big mouths. She deserved to win. I’m glad she won! Stop reading into s***!”

Brandi and LeAnn have a long history. The former Bravo star filed for divorce from Eddie Cibrian in 2009 when he had an affair with LeAnn after meeting on the set of their Lifetime movie, Northern Lights.

The singer revealed that she felt free following her affair with Eddie Cibrian. LeAnn Rimes didn’t like being put on a pedestal. She’s glad to show the world that she’s an imperfect person. All of her life, she felt she had to become a role model.

“My husband and I, our relationship was very public and going through an affair publicly I think was probably the moment where the rug just got ripped up from under me, and really the mask fell away,” she said, per the Toronto Sun. “I felt like, ‘Oh, I’m human’ and I don’t have to hold up being ‘LeAnn Rimes’ anymore. I can learn my lessons and have my humanity, and I think that was the biggest piece for me.”

LeAnn also credits her rehab stint in 2012. She learned how to focus on herself and her own needs before her career and public image. Now, she shares some of her mindfulness tips on Instagram with her followers. Earlier this year, she released an album with meditation chants.

What are your thoughts on Brandi and LeAnn reuniting for the holidays? Sound off below.