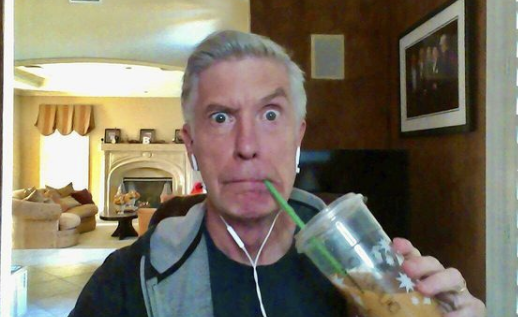 Long-time Dancing With The Stars host Tom Bergeron exited the show over the summer. The network apparently chose to move in another direction. Tom isn’t letting it bother him, but he also has no plans to ever return to the show. He’s enjoying retirement and tackling new projects as they come to him.

These days, Tom Bergeron is working on an upcoming novel.

However, we don’t know much about the project yet. But the former DWTS seemed to hint at it in a social media post.

It can take quite a while to write an entire book. And after that, it will have to go for editing and rewrites. It could be a very long time before Tom’s book is ready for fans to read. But keep following him on social media for more updates.

When he isn’t working on his novel, Tom Bergeron is trying to stay in shape. As you probably guessed from his social media post, he dedicates a lot of time to getting his steps in. He recently reunited with Dancing With The Stars pro Sharna Burgess to get a workout in.

Loved adding a 2nd hike this week. Not just for the fitness. For the Burgess. 😉 (with @SharnaBurgess) pic.twitter.com/o7CLcwVlYC

Sharna posted a similar photo and captioned it, “🕺🏻 F A M 💃🏻 @tombergeron it was the best thing ever seeing you this morning. So glad we made our hike happen, and truly I’VE MISSED YOU!!!!! Chats, laughs and calorie burning…. a combination I want more of :).”

Tom did say that he left several friends behind on Dancing With The Stars. It seems like Sharna was definitely one of them.

What Else Is In The Cards For The Former Host?

Tom said in a recent interview that he never planned to return to Dancing With The Stars. But fans can still catch him in other entertainment projects from time to time.

“I always thought Dancing would be where I end my hosting tenure,” the former host recently said in an interview. “When people say, ‘I’m not gonna watch until you’re back,’ I say, ‘Well, there’s really no ‘until’ here.’ This train has left the station. I appreciate the sentiment, and I don’t hold it against anybody if they [watch].”

But he’s entertaining himself by hosting a virtual table read of It’s A Wonderful Life.  According to the Ed Asner Family Center, the table read is available for a limited run between now and December 31.

If you love keeping up with Tom Bergeron, he’s pretty active on Instagram and Twitter. Make sure to follow him and keep up with his day to day antics.

Keep following us on social media for more stories like these. We’ll do our best to keep you updated when we hear more about Tom’s novel.