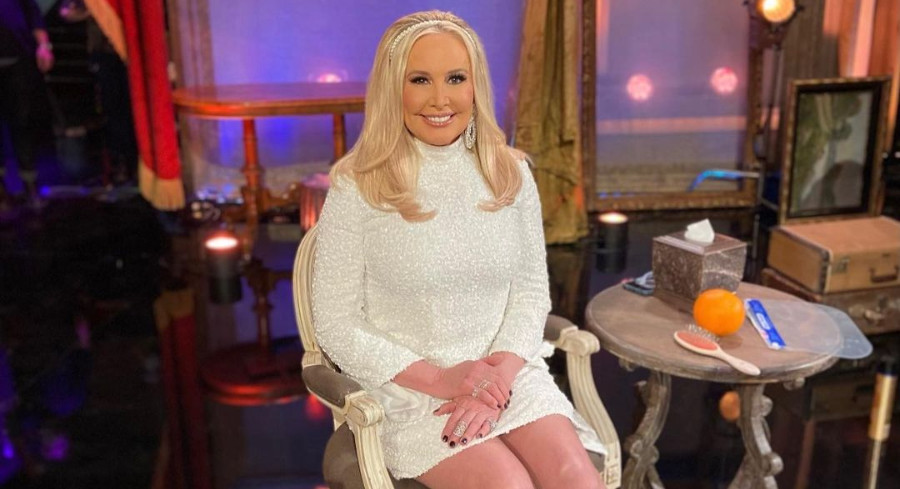 The Real Housewives of Orange County Season 15 reunion is in the books. It’s not clear when it will air, but details from the get-together are slowly coming out. What we know so far is that the reunion was held in person instead of the virtual reunions from other Bravo shows earlier this summer. It seems Andy Cohen travelled to the OC to film.

I can’t believe Andy risked COVID for the #RHOC reunion and THOSE were the looks that walked in 💀 pic.twitter.com/Jb8taoK3Y1

Additionally, Braunwyn Windham-Burke shared snaps on her IG Stories of prepping for the reunion. Her reunion prep included Botox, but it seems she isn’t the only RHOC star taking drastic reunion prep steps. Photos of the reunion looks leaked online earlier this week. And fans have A LOT of thoughts about the looks.

Things started off great with the Housewives. But then the coronavirus pandemic hit and things got tense. For reasons that are still playing out on-screen, Braunwyn Windham-Burke is no longer speaking to her co-stars. Fans will likely have to wait until the reunion to find out what happened. The Blast reports that both Braunwyn Windham-Burke and Emily Simpson brought “receipts” to the reunion.

While not much is known about the topics of discussion at the reunion, the ladies’ various outfits caused a lot of talk on social media. Earlier this week, each RHOC star posted their looks on their individual Instagram accounts. Fans combined the photos into one collage and it spread like wildfire on Instagram.

Here is one such collage from Bravo fan account @realhousewivesfranchise.

The most shocking reunion look goes to Shannon Beador. Fans immediately flooded social media with their thoughts about Shannon’s look. First of all, fans focused on how different her face looks. While Shannon admits to gaining back some of the weight during the pandemic that she lost last year, fans believe it is more than that. Fan speculation includes fillers or a facelift.

Many fans compared her to actress Jennifer Coolidge, AKA “Stifler’s mom” in American Pie. She also starred alongside Reese Witherspoon in Legally Blonde, learning to bend-and-snap with the best of them.

I saw a tweet about Jennifer Coolidge and #RHOC and I was so confused until I saw Shannon’s reunion look.

Another issue fans noticed was the drastic color difference between Shannon’s face and her hands and legs. She wrote a short, white dress, which only accentuated the stark color difference.

Literally one of the worst reunion looks I’ve ever seen.

Unflattering, awkward, informal and why are her legs a different color than her face? #RHOC pic.twitter.com/x9yO8yGc3W

Fans are as divided over Braunwyn Windham-Burke’s outfit as they are the RHOC star herself. During the summer months, before RHOC premiered, fans loved that Braunwyn took a stand against racial injustice by joining protests. However, in a recent episode Kelly Dodd made shocking allegations that Braunwyn hired a professional photographer to document her appearances at the protests. Braunwyn has yet to respond to those allegations.

But fans are quickly losing respect for Braunwyn. While fans supported her when she revealed she was an alcoholic in the Season 15 premiere, new revelations keep coming out that make Braunwyn Windham-Burke look bad. For example, in a recent episode, she revealed that she is sometimes physically abusive to her husband, Sean Burke.

Braunwyn also recently came out publicly as a lesbian, but says she will continue to stay married.

For the reunion, Braunwyn rocked a tight black dress, a long pony-tail and black combat boots. Some fans trolled her for her “stereotypical lesbian” outfit. But other fans absolutely loved her look.

@braunwyn #RHOC reunion look is literally GIVING ME LIFE!!! It is one of the best I have seen on housewives. She has a bit of Gaga and a bit of Ariana with such hot blonde hair and an edgy punk dress complete with Combat Boots. 👑👑#QueeningOut #DragGoals

Throughout her 3 seasons on RHOC, Gina Kirschenheiter hasn’t been the glamest of the housewives. In fact, during Season 15, she made several jokes about her frumpy wardrobe. In an early episode, fans took to social media to call her out for letting her hair extensions show. During the quarantine, Gina took the extensions out entirely and rocked her natural blunt bob.

Who do you think had the best reunion look? Season 15 is quickly coming to a close. Bravo has yet to announce when the reunion will air, but it should be in early 2021.