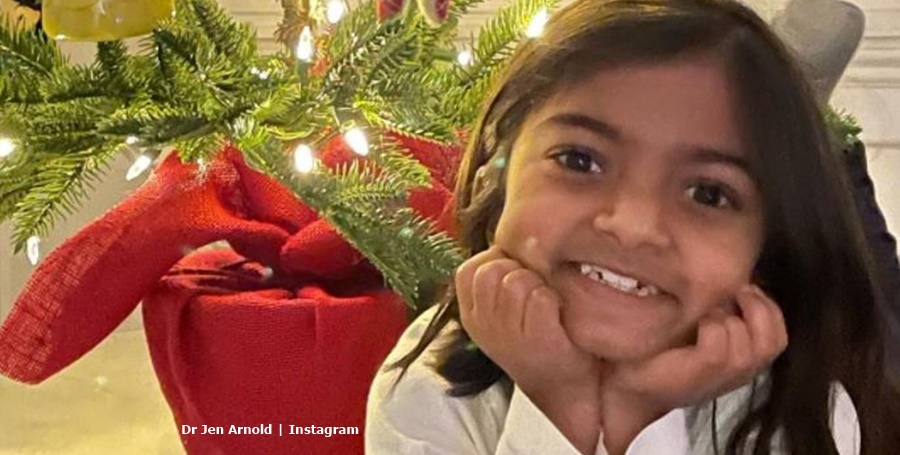 Zoey Klein of The Little Couple family turned nine years old this year. However, the adoptive child of Jen Arnold and Bill Klein is still young enough to thoroughly enjoy Christmas. Now, her happy infectious ways make many fans happy. But, did she really break the internet with her awesome dance?

2020 marked the 7th year since Zoey joined Bill Klein, Jen Arnold and little Will’s family. In 2013, the little girl from India looked less than comfortable with the USA and strangers. But over the years, she adapted. And now, fans see a very fortunate young girl living in safety and financial security. So, she’s got a lot of things to dance about. This Christmas, she danced such a cute dance in front of the Christmas tree.

The Little Couple mom, Jen Arnold shared on her Instagram about Zoey Klein dancing. In her caption, she wrote, “Twas the night before Christmas & Zoey broke the internet with an awesome dance.” Well, sadly, Zoey never broke the Internet. In fact, she got about 2.5k comments. But that’s not bad for a little kid. Later,  when Jen reposted her dancing, she captioned it with “Got it?”

Then another one noted, “Adorable Zoey has the moves 💕Merry Christmas 🎄⛄️🎅🏻🎅🏻.”

Of course, people clamored for more seasons of The Little Couple show. One person commented, “How cute! 💕💕💕💕💕 Will u all be filming a new season of ur show or r u all in hiatus because of the virus? I miss watching u all! Happy Holidays and God bless! 🙏🙏🙏🙏.”

Will, there be another season on TLC soon?

The List speculated that fans might see another reason in 2020. They predicted a possible season in about August. Well, August came and went. And, no show. In fact, the last time fans saw the family on TV came in September last year. But there might be a very good reason for the long delay, apart from the coronavirus. The Hollywood Reporter noted in May this year, that Jen and Bill lost a “lawsuit against reality show producer LMNO Cable Group.”

Zoey Klein’s mom and dad started their lawsuit “after Discovery Communications and LMNO [fought over] rights to The Little Couple and other shows amid an accounting scandal.” Discovery won their case a few years ago. But Jen and Bill’s only got settled in favor of LMNO in May this year. Perhaps Discovery waited for the outcome of that.

Of course, it might not explain the delay. But hopefully, fans see more of their favorite Little Couple and Will and Zoey Klein in 2021.