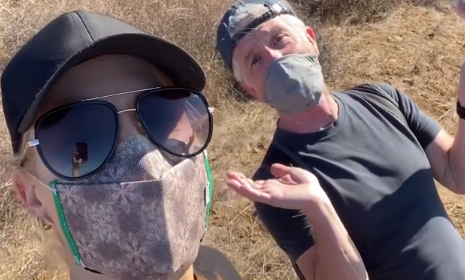 Tom Bergeron may no longer be part of Dancing With The Stars, but he’s still part of the family. Pro dancer Sharna Burgess was delighted to reunite with the former host.

If you follow Sharna on social media, you can clearly see she’s an avid runner. Tom appeared to join her on a recent run. And of course, they wore masks for safety reasons.

“Loved adding a 2nd hike this week. Not just for the fitness. For the Burgess 😉 (with @sharnaburgess),” Tom captioned a video of the two goofing off. Sharna shared her own photos of the excursion.

Loved adding a 2nd hike this week. Not just for the fitness. For the Burgess. 😉 (with @SharnaBurgess) pic.twitter.com/o7CLcwVlYC

“🕺🏻 F A M 💃🏻 @tombergeron it was the best thing ever seeing you this morning. So glad we made our hike happen, and truly I’VE MISSED YOU!!!!! Chats, laughs and calorie burning…. a combination I want more of :),” she wrote.

It’s been quite some time since the two were able to spend time together. Season 29 was the first season without Tom Bergeron. But if you recall, Sharna Burgess wasn’t part of Season 28. That means Season 27 was the last one they spent together. Sharna will likely come back if the network renews DWTS for Season 30. However, Bergeron will not.

If you vowed to stop watching DWTS until Tom and Erin returned, we have some bad news. They’re definitely not coming back.

“I always thought Dancing would be where I end my hosting tenure,” the former host recently said in an interview. “When people say, ‘I’m not gonna watch until you’re back,’ I say, ‘Well, there’s really no ‘until’ here.’ This train has left the station. I appreciate the sentiment, and I don’t hold it against anybody if they [watch].”

Bergeron went on to say that he’s always open to surprises, but he imagines his hosting career came to an end. But that doesn’t mean he’s retiring from the limelight permanently.

The former host has been pretty supportive of the show so far. Even though he previously said he didn’t agree with many changes made over the past few years, he still has lots of friends in the cast and crew. He said he earnestly wanted to see his contacts succeed.

What’s The Former Dancing With The Stars Host Up To Now?

But if you miss Tom Bergeron, you can catch him in a virtual table read of the beloved Christmas classic, It’s A Wonderful Life. It already happened on December 13, but you still have chances to see it again. According to the Ed Asner Family Center, the table read is available for a limited run between now and December 31. Don’t miss your chance to listen!