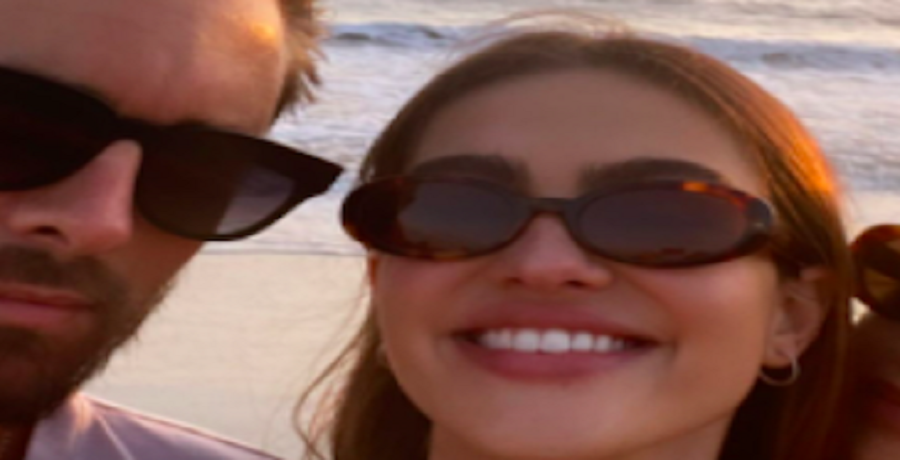 Reports are claiming that Scott Disick and Amelia Gray Hamlin got flirty on social media. That’s still up for interpretation. Scott posted a cryptic message on Amelia’s Instagram post. However, the comment may make some people feel old.

Flirting has changed a lot thanks in part to social media. Even a sarcastic response could even indicate that someone is expressing interest. However, some fans noticed the flirty vibes between Scott and Amelia. On Wednesday, December 16, Amelia posted a sexy photo on Instagram.

Check out the spicy new photo

Lisa Rinna and Harry Hamlin’s daughter debuted longer hair on Instagram. In the photo, she wore her brunette hair in romantic waves. Amelia Gray Hamlin made a sexy expression as she wore a little black dress. She captioned the post: “almost 2021 lookin like…..”

The model gazed off into the distance as she seductively held a finger to her lips. She credited her pout from Lisa’s newly released Rinna Beauty line, which she tagged in the post. Scott made it clear that they’re very much an item. He took to the post to leave a cryptic comment.

What did Scott Disick say?

The Flip it Like Disick star shared his appreciation for Amelia’s sultry photo. Scott Disick commented: “8 to a 12 real quick,” which seemed to be about her looks. Amelia then joked: “5 to 20.” The reality star looked glamorous than she does in her other selfies.

Her eye makeup and hair extensions are from her upcoming line, Salty Locks. Both her mom and her sister Delilah Hamlin shared their support on the post, as well. “Wow,” Delilah simply wrote. Meanwhile, the RHOBH star left a series of heart emojis for her youngest daughter.

The status of Scott and Amelia’s relationship

These cryptic comments come after the couple seemingly confirmed their relationship. TMZ shared the photos of Scott Disick and Amelia Hamlin packing on the PDA during their beach date on November 17. The 41-year-old had his arm around the 19-year-old, who rocked a bikini. Later that evening, the couple dined at Tony Taverna’s where they photographed leaving the venue within minutes of each other.

That sighting came after their unexpected Halloween date. The television personalities were spotted attending the same party together. Romance rumors started soon after. Fans noticed that Scott and Amelia also went to Montecito, California restaurant Tre Lune later that night. While both of them shared photos of the restaurant on the same night, they didn’t tag each other.

Disick dated another young model before

The rumors between Scott Disick and Amelia Hamlin started shortly after his split from Sofia Richie. The couple ended their relationship after three years of dating. While they first split back in May, they officially called it quits by August. An insider told Us Weekly that Scott and Sofia were “off and on” during those two months.

Lionel Richie’s daughter tried to make things work between them. But Scott wanted to move on and the pair haven’t spoken since. While he jumped back into the dating scene, he’s still focused on his family with ex-girlfriend Kourtney Kardashian. Just days before his flirty comments with Amelia, he called the KUWTK star the “best baby-maker in town.”

What are your thoughts on Scott and Amelia’s Instagram exchange? Do you think they were flirting? Sound off below.