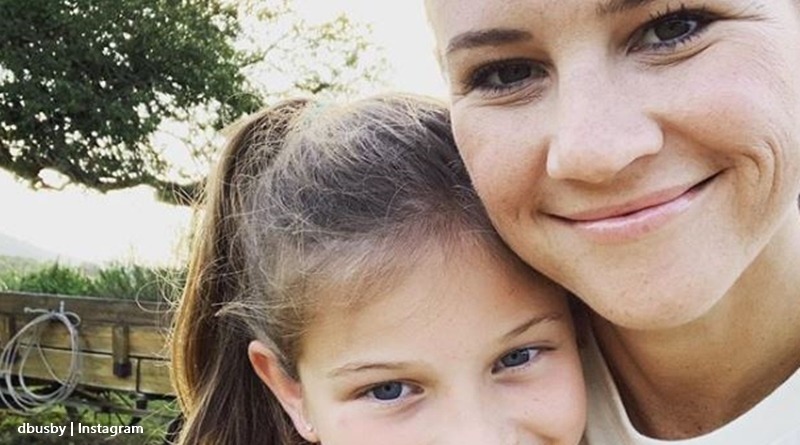 Blayke Busby and her cousin McKenzie play basketball together. Now, Adam Busby told OutDaughtered fans that his daughter just won her first game. She plays for League City Sharks. Adam sounds very proud of Blayke as the sport is quite new to her.

Blayke Busby and McKenzie looked like twins in basketball photo

We reported that Blayke’s Uncle Dale Mills shared a photo of his daughter McKenzie with Blayke. They looked very cute in their basketball uniforms. In fact, they looked so much alike that fans really thought they could be twin sisters. OutDaughtered fans who played the game themselves loved it that the two girls learned the sport. Meanwhile, fans who live in those States where COVID-19 keeps sports centers closed felt a bit envious.

Well, what Uncle Dale failed to disclose in his post, is that Blayke only recently started playing the game. On Tuesday, OutDaughtered dad Adam shared a photo of himself with Blayke and Danielle. They went and watched the kids play a game. And, he mentioned that Blayke Busby took it up as a “new sport.” Next, he talked about how well his daughter played. Finally, Adam noted that her team won.

In his caption, Adam noted, “FIRST Basketball game in the books!” TLC fans commented and praised Blayke. And some of them hope that Adam shares some videos of her playing. One fan wrote, “aww so happy to see her trying and enjoying new things!” Then another person who also took up basketball recently said that much like Blayke, she “loves” the sport.

OutDaughtered fans felt a bit nostalgic when they saw Blayke Busby won her first game. Some of them said how much they “missed” those days. And, anyone who ever played the game knows the fierce competition and the thrill of the ball going through the hoop.

Basketball a popular sport for girls

According to Sportsrec, ESPN noted that basketball fast becomes very popular with girls. In fact, nearly half a million of them play “for a school-sponsored team.” They also mentioned that just like League City Sharks, “many developmental leagues…teach basic skills.” However as Blayke Busby grows older, competition probably becomes fierce. Boys still outnumber girls in the sport. After all, big money beckons if they show enough talent and end up playing for the NBA.

Maybe if the OutDaughtered star Blayke Busby keeps on at the game one day she helps bring more equality to big money sponsorship for females.