Netflix subscribers are BEGGING the streaming service to provide details on Julie and the Phantoms Season 2. Presently, we can’t even say for sure if Netflix has or will renew the series for a second season. But, we do know Season 1 ended on a huge cliffhanger. And, fans are hoping that alone is reason enough for Netflix to renew for a second season. Moreover, we also know the cast is completely open to doing Julie and the Phantoms 2. In fact, many members of the cast are itching to explore the backstories of some of the characters.

If you want to stay up to date with the latest information on Julie and the Phantoms, Instagram is the way to go. Netflix has set up an account dedicated specifically to the show. In fact, the account stays pretty active with posts nearly every day. The post consists of updates about the cast, hype for the series, and random clips or photos from the show.

And, every single time a new post pops up on Instagram… There is one common thing that also pops up in the comments. A request. A request for information on Season 2. And, in the comments of the post revealing the release of a new Julie and the Phantoms book… Subscribers admit they are “STARVING” for Season 2. 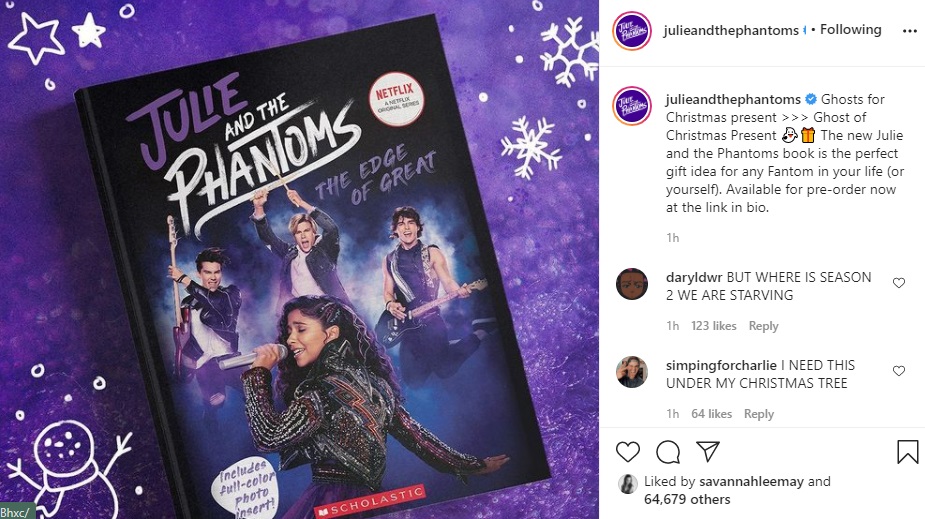 Subscribers on Twitter also push for information on the next season.

On Twitter, Netflix subscribers admit they are having a hard time with the lack of an announcement confirming a Season 2. They are growing concerned Netflix might be considering dropping the series. On Twitter user noted a few days ago the perfect Christmas present would be confirmation of Season 2. Or, even better, they would just like the season to be dropped. That being said, we have no reason to believe Season 2 has been produced yet. So, that last one isn’t likely. Here’s some of what other subscribers are saying:

okay but like are we getting julie and the phantoms season 2 orrrr???

No because that Winx Club live action is not it- I would like to ask Netflix however, to renew Julie and the Phantoms for a season 2

So we get last names but no season two confirmation? Netflix get your shit together Alex Mercer and Reggie Peters can’t do shit if y’all don’t renew Julie and the phantoms for a season 2 😭😭😭

On Twitter, it seems as if subscribers are really letting Netflix have it over the lack of information regarding Season 2. Fans of the first season are replying to nearly everything Netflix posts on Twitter. And, they are redirecting it to talk about Julie and the Phantoms Season 2 instead.

Given the amount of hype the series is getting on social media. It would be a mistake for Netflix not to renew for a Season 2. Especially when the cast is definitely onboard.

So, are you starving for Season 2 as well? Are you shocked Netflix hasn’t renewed the series yet? Share your thoughts in the comments.