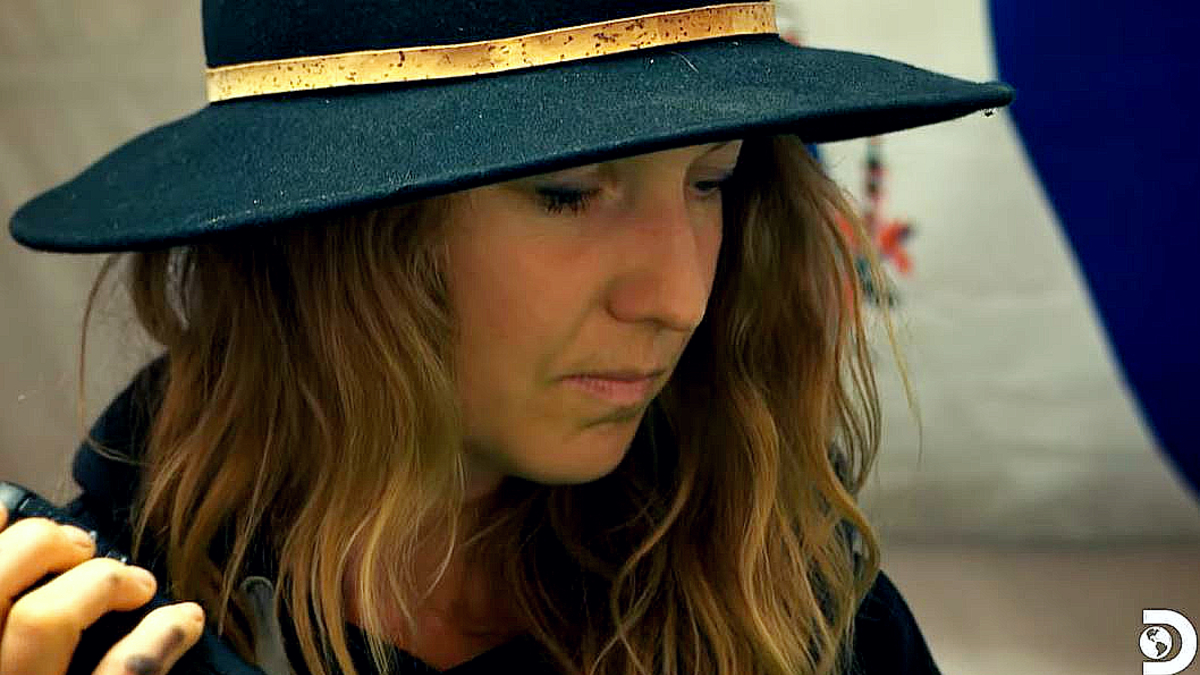 On the next Gold Rush this week airing on Discovery, we follow up the Rick Ness “hunch” storyline with Karla Ann at Duncan and the Cheap Cut.

And as TV Shows Ace exclusive clip shows, Karla Ann is worried as gold is MIA in the sluice box.

This lack of evident gold alarms her as she radios Rick to come and see what’s going on.

During the last four weeks, the lower Duncan Creek area called the Cheap Cut has been where Rick Ness and his crew that includes Carl Rosk, Karla Ann, and Chris Kruse have been mining. He scouted this moraine spot (where gold runs off the mountain) and he felt there was more gold to be found.

Kruse was not liking the “hunch” remark that Ness threw out in last week’s episode. Ness’s hunches did not pan out last season.  Now this week, Karla Ann is on high alert in TV Shows Ace clip where the fine gold, always an indicator, is now not showing up.

In the clip, Karla Ann worries

In the preview below, we are in the gold room as Karla Ann washes concentrate from two days of running to separate out the fine gold. We open with her looking concerned. She says: “These are our nuggets…it looks good however they don’t weigh much.”

In gold mining, bigger isn’t always better. She adds: “It’s the fine gold that adds up.”

She says: “We’ve been doing cleanups every 20 hours just to stay consistent and try to read the ground a little bit better. But for whatever reason this cleanup’s
not looking so hot. I’m not sure why, it’s that fine gold that usually is there it’s just not here this time.”

Karla Ann radios Rick and shares the news. Up until now it had been a consistent yield of fine gold. They are worried this ends their good luck streak.

Also last week we saw Tony Beets move heaven and earth to cash in on lost gold as Rick Ness followed a hunch.

Over at Elkhorn mountains in Oregon, the veteran crew lead by Fred Lewis are working hard while dealing with compliances. Freddy Dodge’s nephew Kendell Madden and Fred are guiding the crew, Johnny Stanz, Stefan Generally, Kyle Pletzke and Stuart McKenzie, all of them are hoping for a brighter future.

Meanwhile Parker Schnabel, though not featured on the episode, is still tops in the leaderboard for gold recovered.

Beets needs a 3000 ounce season gold and had less than a quarter of his target as of last week. Last week we saw he netted an ounce for every hundred yards.

He resurrected an old plant to speed things up. Kevin and Mike were left with a hopper removal to balance the heavy load after trying to move it unsuccessfully.

Tune in Friday to see how Ness ultimately fares, and if the Beets luck also keeps on the good foot: