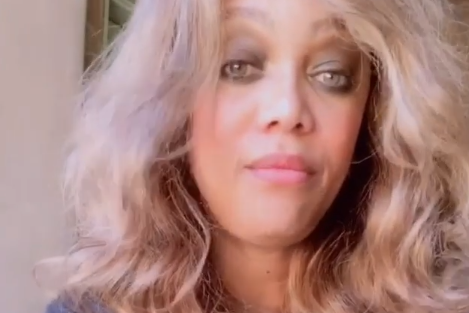 Since Tyra Banks announced she would be the new host of Dancing With The Stars, rumors began to fly. Anonymous sources seem to have something to say all the time. Some rumors seem more likely than others. New rumors say that Tyra will definitely ask for a higher paycheck if DWTS comes back for Season 30. And this is one rumor that really seems believable.

“Tyra is an incredible talent who knows her worth. She has taken a franchise that was a little past its prime and made it into the show everyone is talking about, but even more important than the buzz is the ratings she has been delivering too. At the end of the day, Tyra is a businesswoman, she deserves a lot more money to return next season,” an inside source told OK!

But exactly how much could Tyra Banks get next year? According to INQUISTR, that could look more like $300,000  per episode. Tom Bergeron and Erin Andrews reportedly earned about $150,000 each, and Tyra could argue she does the work of two hosts now. And Tyra is also arguably more well known than either Tom or Erin.

“Tyra is talking about ways to include a runway on the set and wants the dancers and stars do a catwalk on each show. Maybe even a walk-off,” the insider told OK! “She has been talking with several top designers to get them involved in the costumes. And, yes… expect even more controversial stars next season.”

First Monday without my @dancingabc fam and I’m already missing all the dance, the glitz and the glam, and getting to play dress up each and every week! pic.twitter.com/cdF4Bkx828

Who Will Take The Stage Next Season?

This statement seems to confirm previous rumors. Anonymous sources said that Tyra allegedly didn’t want any Real Housewives stars or celebrities that no one cared about. She really wanted people who made headlines to boost ratings. Many viewers tuned in to Season 29 to see Tiger King‘s Carole Baskin compete. No one really thought she had a shot at the Mirrorball Trophy. But everyone wanted to see her dance.

However, Tyra squashed those rumors after Real Housewives fans and even Bethenny Frankel called her out.

“There will be another rumor next and another one. After a while, I’m just going to be like, ‘I just can’t even answer this crap anymore,’” the DWTS hostess said at the time. “There’s somebody that’s hating. Somebody that’s mad there are changes on Dancing With the Stars so they are making stuff up.”

So what do you think? Do you think Tyra Banks is hunting for a higher salary, or is this just another random Hollywood rumor? Let us know what you think.