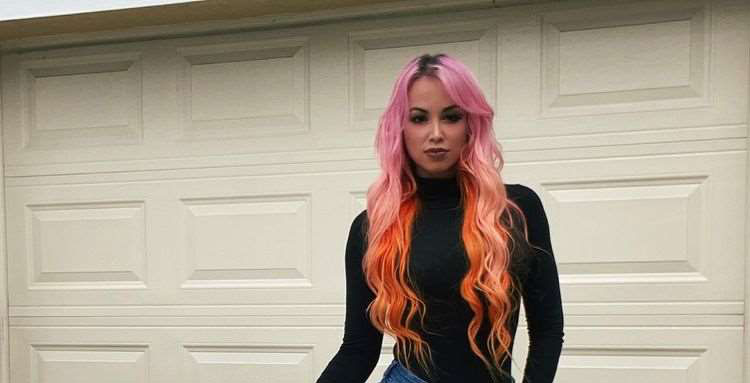 Paola Mayfield of 90 Day Fiancé fame, knows how to crank out the social media content. While some posts of late leave followers questioning her tactics, she doesn’t seem to mind. For example, Paola debuts a new look to her fans and gets trolled. Paola Mayfield hints at a new career in her latest cryptic Instagram post.

Consequently, it seems that Paola’s latest Instagram post is another new look debut. However, this new look is only a slight variation of a style Paola rocks in the recent past. In the photo, Paola’s washboard abs steal the show. She’s rocking pink hair again. Paola’s outfit is edgy. She dons a black top with off the shoulder sleeves and shredded jeans. Tying the outfit together is a pair of black, lace-up, peep toe heels.

Notably, Paola’s pink hair isn’t the only thing pink item in the photo. She’s rolling a tall pink case resembling something a make-up artist would travel with. Paola captions the photo with, “Photoshoot ready! Pink is the color of my new [sic] careeeerrr adventure.” She wraps the caption up with a sparkle heart emoji.

Sadly, there are still trolls

Unlike the last time, Paola shows off a new look, there doesn’t seem to be much hate on this post. While there is mention that some people prefer her as a blonde, it’s followed up with “every color suits you.”

That’s not to say that there isn’t trolls on this post, because there are. However, these trolls only echo the same things that are said every time Paola posts a revealing photo. These comments all share the sentiment that Paola doesn’t have class. Additionally, the negative comments insinuate that she doesn’t have respect for her son.

What is her new career?

Unfortunately, scrolling through the comments it appears that Paola doesn’t divulge what her “new career” is. Several fans ask, but to no avail.  Seeing the word photoshoot in the caption doesn’t cause much alarm. Since, as fans of 90 Day Fiancé know, Paola, is (was?) an aspiring model.

Luckily, for inquiring fans, there is some clue as to what Paola’s new career is. One fan writes, “I have that same makeup case.” Seemingly hoping for a response, the fan also asks, “What’s your favorite brand?”

Fans go on to speculate that Paola is starting a career as a makeup artist or doing lashes. However, it still doesn’t seem that Paola confirms or denies these suggestions. One thing is for certain, Paola has a lot going on. One fan writes, “Another career??? Girl I’m tired for you.” Not only is Paola a mother, she endorses several products on social media, and seems to be getting a personal training business off the ground.

While it seems that Paola Mayfield keeps herself busy, fans are dying to know what her new career is. What job do you think Paola is adding to her resume? Let us know in the comments below. Stay tuned to TV Shows Ace for more 90 Day Fiancé and other reality television news.