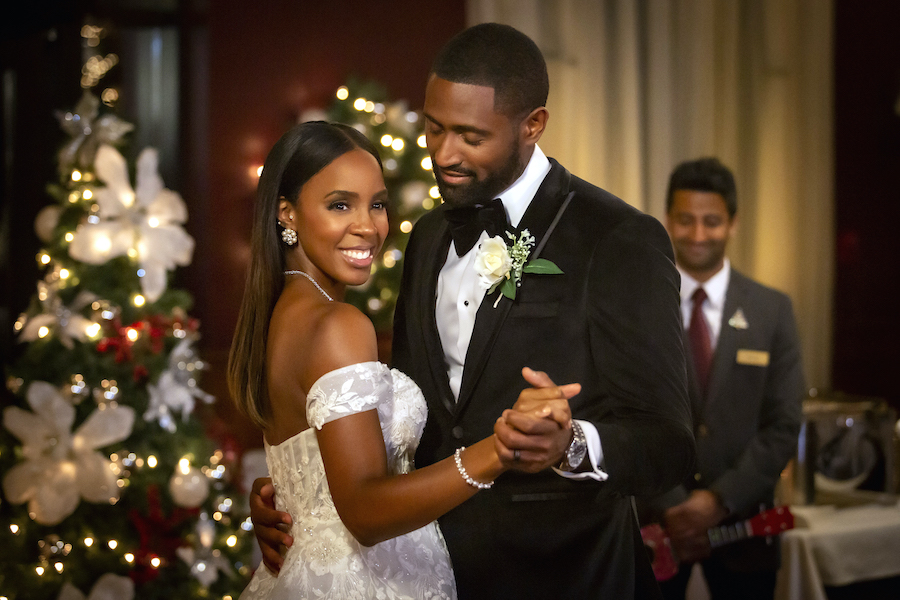 The boisterous Liddles are back! Lifetime’s Merry Liddle Christmas Wedding is the sequel everyone is waiting for. Starring Kelly Rowland (Empire), Thomas Cadrot (My Best Friend’s Bouquet), you know that nothing goes as planned with the Liddle family!

What Is Lifetime’s Merry Liddle Christmas Wedding About?

Are you ready for Lifetime’s first Christmas movie sequel? Merry Liddle Christmas Wedding continues Jacquie and Tyler’s love story. They plan a magnificent destination wedding, but her snobbish wedding planner suddenly quits on her, thanks to her meddling family.

Despite all obstacles, the couple have a magical wedding that they will never forget.

For all of those playing Christmas movie bingo, there is a scavenger hunt planned and who had “gondola ride” on their board? Those are some of the plans, but we have to watch to see if these are really some of the Christmas activities that the characters will enjoy on screen.

Not An Easy Road To The Wedding

According to Thomas Cadrot, who spoke to Hollywood Life, Jacquie and Tyler will have some obstacles before they say their vows. But, Cadrot is not about to reveal any spoilers!

What he does say is that they filmed in Victoria, British Columbia. The setting was gorgeous. Moreover, Lifetime splashed out for bigger everything, including sets and clothing. The In The Key Of Love star shared that when he saw Kelly Rowland walk down in her bridal finery, it took his breath away.

Another plus was getting together with the same group of actors. “For me, particularly, just being part of this cast the first time around was so much fun. After 20 days of shooting, it felt like you were kind of leaving your family a little bit. So the fact that we got to be reunited a year later, especially doing a sequel, which has never been done at Lifetime, I feel very, very happy.”

You're invited to the biggest Liddle event of the season! 🎄 Make sure you ❤️ this Tweet to RSVP yes and receive a reminder when #MerryLiddleChristmasWedding premieres on Lifetime. ❄️🌟#ItsAWonderfulLifetime pic.twitter.com/xbF81KJkxK

Kelly Rowland Wanted To Do This Movie Despite Pandemic

Recently, Kelly Rowland spoke to The Today Show about Merry Liddle Christmas Wedding. Despite everything shutting down, due to the coronavirus, making this movie was important to fans. The stars realized that fans need Christmas movies more than ever.

In July, they began filming the Lifetime sequel. They all had to get tested often and stay in their bubbles. They got regular COVID tests, and they safely made the movie in three weeks.

The other big surprise for the Destiny’s Child singer was that she was pregnant at the time of filming. No one on set knew. But, she hid her bump with big sweaters. She is expecting the baby soon. Her six-year-old son Titan, with husband Tim Weatherspoon, has already picked out a name for the baby. But Kelly is not revealing anything!