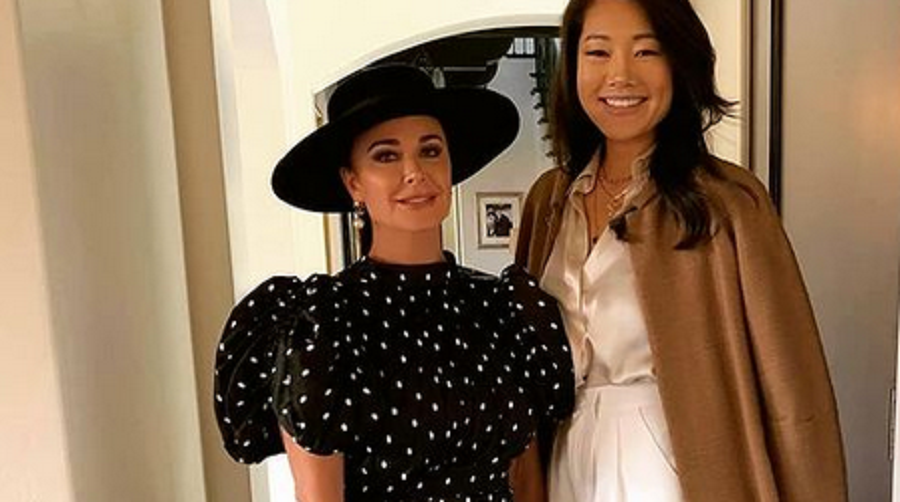 Kyle Richards just revealed that she’s “not feeling well.” This comes after filming for The Real Housewives of Beverly Hills Season 11 shut down over COVID-19 concerns. The reality star was not able to celebrate Thanksgiving with her family. She shared that her former RHOBH co-star Teddi Mellencamp delivered her a meal because she was “unable to cook.”

Is Kyle the real reason that production shut down? Fans are starting to point the finger at her. According to ET Online’s report on Thursday, November 26, a crew member contracted COVID-19. The inside source claimed that all of the Housewives are safe and healthy.

The RHOBH star is under the weather. Following the news that production was halted on The Real Housewives of Beverly Hills Season 11, Kyle Richards revealed on her Instagram Stories that she’s “not feeling well.” She was in such bad shape on Thanksgiving Day that she could not cook a meal for her family. Kyle shared that some of her friends and family came to her aide.

“Thank you [Teddi Mellencamp] for dropping off a Thanksgiving meal for my family (at 7 am today) knowing that I am not feeling well [and] unable to cook,” Kyle wrote. “Thankful for you my friend (my family is too).”

In a follow-up post, Kyle admitted that Thanksgiving 2020 is different from the previous years. But she was still feeling grateful that day. The reality star said she’s “grateful” for her “family, friends, dog, work.” The Bravo star will not allow “2020 to stop me from reflecting on all the things that I am so thankful for.”

In her lengthy message, Kyle wished her fans and followers a happy Thanksgiving. She then added that “this too shall pass.”

Kyle Richards had fans wondering if she halted production. An insider confirmed to Hollywood Life that filming on Season 11 was shut down after a crew member tested positive for COVID-19. However, the future of the show is uncertain.

“They filmed yesterday. Everyone’s been told to quarantine for 14 days and haven’t been told much else right now,” the insider told the outlet. “They have no idea when they’ll start up again. Everyone’s just waiting for more info.”

ET Online also reported the news that production halted on RHOBH Season 11. The outlet added that filming should resume after the holiday season.

Due to the international travel restrictions, the Housewives can’t have any overseas cast trips this year and are staying close to home. It’s unclear what Season 11’s storyline will be about or what the cast members will do to occupy themselves. They may spend most of their time dining, shopping, and quarantining at hotels.

Earlier this month, The Real Housewives of Atlanta paused filming after a crew member tested positive for COVID-19. In October, The Real Housewives of New York partially suspended filming after a crew member contracted the viral illness. Even if the cast and crew follow all safety measures, it can be risky for those who work front and center. Cases continue to climb across the country, as CDC addresses the importance of six feet of distancing and face coverings at all times.