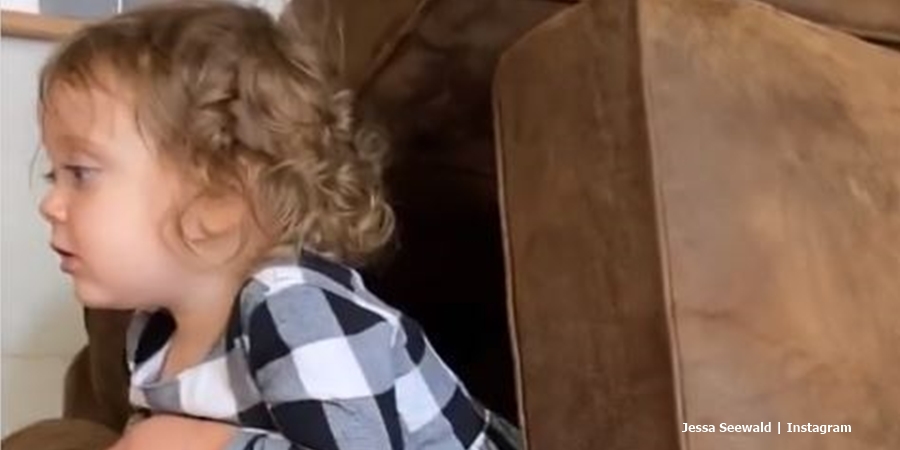 Jessa Seewald shared a very cute video of the three kids enjoying fort-building. Little Ivy, Henry and big brother Spurgeon had the time of their lives. Perhaps somewhere in the world, there’s a person who never built a fort with couch cushions. But most people recall that type of fun as kids.

Jessa Seewald shared a cute clip of the fort

Ben and Jessa’s youngest baby girl seemed very happy and kept poking her head out of the cushion fort. And, her pretty eyes just revealed she loved the fun experience. Meanwhile, Spurgeon discovered the manufacturer’s label on the couch. Actually, the bright boy started explaining to his brother what it said. One fan loved that. So, they asked if he “could come and teach” their kid.

Most Counting On fans adore the way that Ben and Jessa Seewald raise their kids. Often, she shares videos of them exploring nature. The kids enjoy hiking in the woods. Used to the cameras, they don’t mind when mom films them. And sometimes, Spurgeon even takes over the camera. Lots of fans noticed that Ivy already seems very comfortable when her mom films her. Cafemom noticed, ” She peeked her head out behind the cushions and gave a sweet little princess wave, calling “mama” out a few times.”

The Duggar family often end up with trolls and critics on their social media. And this time, some people seemed upset with Henry. He played with a gray toy gun with a bright orange tip while he sat inside the fort. Obviously a toy, nevertheless, some people felt upset. Actually, one person quoted statistics about kids who die from gunshots. While the boys played with a toy, they felt it might lead to disrespect for the danger of the weapons.

Did Jessa Seewald make a mistake when she let the kids play with a toy gun? Well, Good Housekeeping reported about kids and toy guns. They noted, “Research shows that there is no evidence that kids who play with guns are more aggressive, and there is even some evidence that kids who use aggression in their play are actually better at calming themselves down in real-life situations.”

Interestingly, the research revealed that if young boys get denied a toy gun, often they use sticks or other objects as imaginary guns. Nevertheless, if people feel concerned, that’s understandable as the USA sees way too many school shootings. But complaining on Jessa’s page probably won’t make her stop the kids from playing with their toy guns. After all, the Duggar family seems fine with them.

Jessa Seewald’s sister Joy-Anna and her husband Austin often hunt elk. And quite often, the other Duggar boys enjoy hunting as well.