There is a mixture of confusion and concern swirling in the Chrisley Knows Best fan base regarding Nanny Faye and her sister Francis. Is Nanny Faye sick? Is Francis sick? Did someone pass away? With COVID-19 continuing to loom. And, both of these beautiful women being up there in age… It is understandable that fans would be anxious about their wellbeing. Fortunately, we can put any Chrisley related death or dying rumors to bed for right now.

Nanny Faye and Francis often get mixed up

Turns out, Todd Chrisley’s brother Randy frequents a Chrisley Knows Best fan group on Facebook. Randy periodically keeps fans updated by posting in the group. He tries to do his part to debunk rumors. Back in May of this year there was a rumor going around that something happened to Nanny Faye. She was ill. Fans worried it was related to COVID-19.

Randy Chrisley, along with the rest of the family, really didn’t understand where the rumors came from. But they assured fans that Nanny Faye was fine.

“Ok don’t know what the confusion is but my mom (nanny Faye) is doing just fine. Nothing is wrong with her and nothing has been wrong with her. She is in great shape and running the streets like a teenager. Thanks for the concern and prayers for her. She’s like the energizer bunny she keeps going and going,” Randy insisted in a post on Facebook.

Some speculate an update on the health of Francis spins out of control like a bad game of telephone. Suddenly, it isn’t Francis who isn’t feeling well. It is Nanny Faye.

Fortunately, they did determine the lumps were nothing to be concerned about. Nanny Faye Chrisley is alive and well. She isn’t battling cancer. Nanny Faye is not dying. And, she isn’t dead.

There is a member of the family in need of prayers

About a month ago, Randy Chrisley revealed on Facebook that Francis was having surgery. He didn’t dive into any details. But, he wanted Chrisley Knows Best fans to keep her in their thoughts. A few days ago, however, he took to Facebook again. Unfortunately, it doesn’t sound like Francis is doing so well. She’s currently battling cancer. And, she has everyone concerned.

Could everyone please say a prayer for my aunt Francis. She has cancer and is going to start treatments very soon. She is loved by so many and especially by my mom. They always love to be with each other. Please keep her in your prayers as she fights this horrible disease.”

Randy Chrisley’s post has been shared over 200 times. But, because the information was shared in a Facebook group… It has, again, become a bad game of telephone. The information is getting repeated and reported, but the details are getting mixed up. 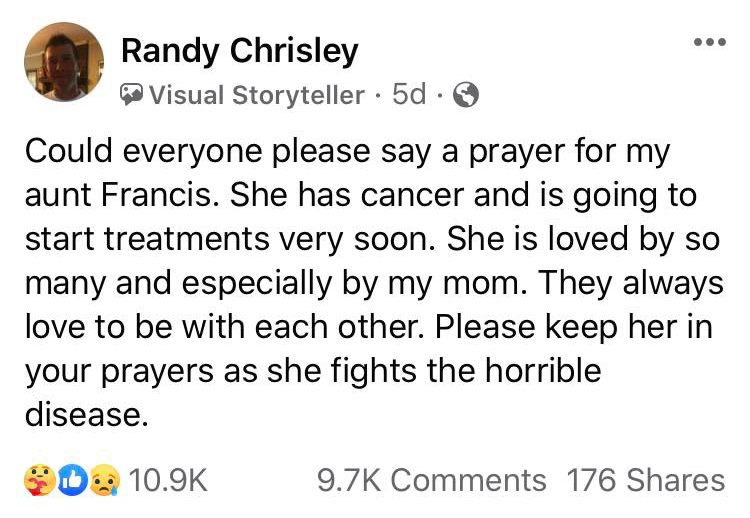 Unfortunately, he didn’t dive much deeper on the details. And, none of the other family members have spoke out about Francis.

Note: There seems to be some inconsistencies across the internet about the proper spelling of her name. The USA Network goes back and forth on spelling it Francis and Frances. Google suggests her name is spelled Frances. But, Randy spells her name Francis. And, we have to assume/trust he knows how to spell his aunt’s name properly. We, however, wanted to include this information in case our readers noticed the inconsistencies like we did.