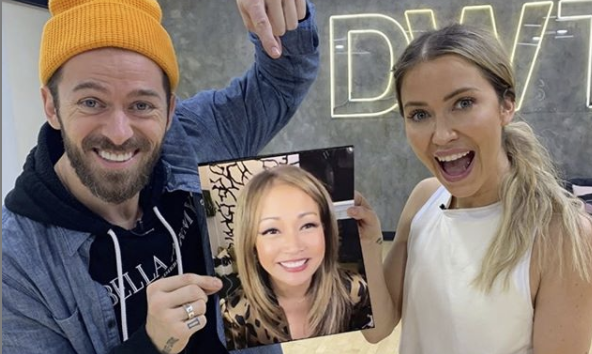 If you follow Dancing With The Stars on Instagram, you may have noticed something was a little off with Carrie Ann Inaba this week. The show’s account posted photos of the competitors and the judge giving them tips. But the photos with Carrie Ann in them looked a little bizarre — especially Kaitlyn and Artem’s photo.

Carrie Ann noticed something was off too. She reposted the photo and added the caption,

“Guess who I worked with on their @dancingabc #RedemptionDance… ❔❓❔❓☺️Congratulations to
@kaitlynbristowe and @theartemc 🙌🏻 on making the semifinals!!!✨✨✨ I worked with them via video chat because I had the flu last week and didn’t want anyone to get sick. (It’s so close to the finals.) So, it was a little different this year but still very rewarding… and fun. I really love these sessions when we actually get to get into details and help them up close. They were amazing and we had a great time. ✨🙌🏻But, that picture of me makes me laugh… what’s up with the baby filter on the photo? I look like a baby.👶🏻👧🏻🤣🤣🤣 Good luck to you both on the semi finals 🎉🎉🎉 and to all the semi finalists!” 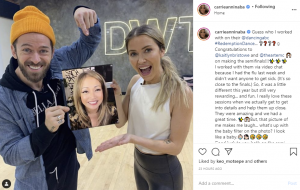 And she would be correct. Someone apparently used a baby filter on her face.

“Love this! You know how to push us in a way that makes us better! Get better! Love you! And baby filter on point! Lol I need this! 💛✨” commented Nikki Bella.

Carrie Ann Inaba and Kaitlyn Bristowe haven’t exactly seen eye-to-eye this season, but it seems like things are going well. Kaitlyn took the time to comment on Carrie Ann’s photo and thank her for her time and helpful tips this week. Even thought the former Bachelorette didn’t always agree with the judge’s comments, she always made sure to show her respect.

Unfortunately, many Dancing With The Stars fans attacked Carrie Ann online and said she was being totally unfair to Kaitlyn. Some brought up valid points, and others just hurled insults. But Kaitlyn Bristowe quickly came to Carrie Ann’s defense.

“I know that Carrie Ann was getting heat on social media for being hard on me and I’m like, ‘Make it stop!’ Because this is a TV show, right?” Kaitlyn said in a recent episode of her podcast. “Carrie Ann is totally allowed her opinions. I’m allowed to not agree with them or feel hurt by them, but it doesn’t mean people need to go and bully on her. I heard that she feels bullied and that makes me feel so terrible because I’ve been bullied so hard online … Don’t go bullying her because she’s being hard on me. That’s her decision and she’s a judge. That’s why she’s paid the big bucks to be a judge on that show, right?”

Things seemed to get better after that. In the episode following that statement, Kaitlyn and Artem earned a perfect score for their routine and a standing ovation from Carrie Ann Inaba.

It always pays to be kind, right?