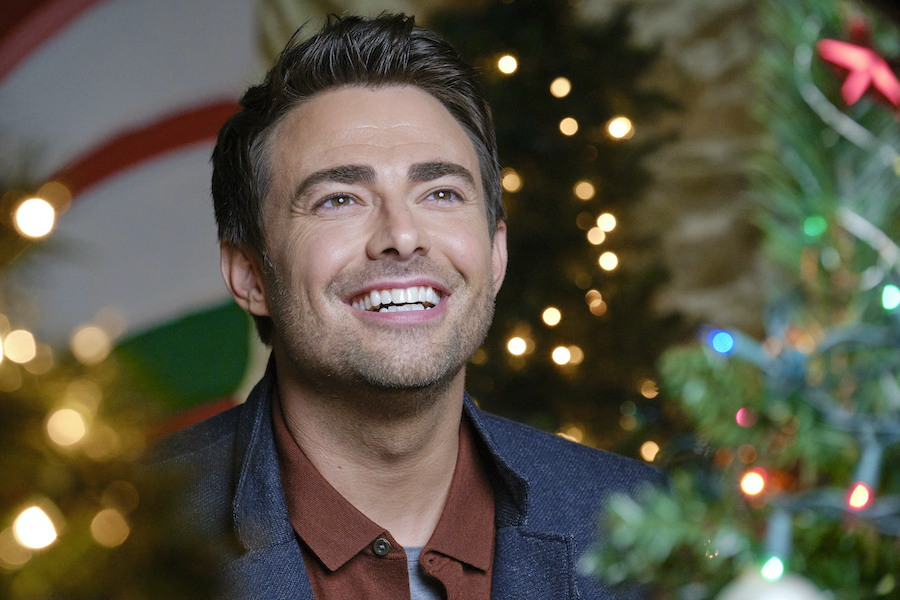 Jonathan Bennett has finally made the movie he always wanted to see when he was younger. This is the Hallmark movie, The Christmas House. Bennett (Christmas Made to Order) stars alongside Robert Buckley (One Tree Hill), Treat Williams (Chesapeake Shores), Sharon Lawrence (Dynasty), Ana Ayora (In The Dark) and Brad Harder (Aurora Teagarden).

The Christmas House is a warm, loving story, with a family member who is in a same-gender marriage. This sort of inclusion is groundbreaking for Hallmark. Most importantly, Jonathan Bennett is happy to be “part of the progress,” as he is the first actor to play an openly gay lead role in a Hallmark movie.

What is The Christmas House about, and why does the Mean Girls star believe he is “part of the progress”?

What Is Hallmark’s The Christmas House About?

According to the Hallmark press release, Phylis (Lawrence) and Bill (Williams) Mitchell have called their entire family home. Because they are working on “some difficult decisions,” Phylis thinks it is time for the whole family to gather around the Christmas tree. She wants everyone home for Christmas, including their two grown sons.

They want to revive a Mitchell family tradition. They call it the “Christmas house.” What is a “Christmas house”? That will be part of the fun and surprise. Robert Buckley, who stars in the movie, also wrote the script based on his own family’s Christmas house tradition. The whole family gets together and creates a winter wonderland. In this movie, it will be for the last time.

Who are the two sons? Actor Mike Mitchell (Buckley) is a tv star, ready for a break. While home, he reconnects with his high school sweetheart, Andi (Ayora). Brandon Mitchell (Bennett), and his husband Jake (Harder) also heed the call home. But, they are anxiously awaiting some big news. They plan to adopt their first child.

There has been a lot of talk about The Christmas House. One of the biggest concerns and criticisms of Hallmark’s The Christmas House is that that the same-sex couple is not the lead story. What Jonathan Bennett says should remove those concerns.

Speaking to ET Canada, Jonathan Bennett shared that “I’m concerned about making sure the people who do watch this see a story of what it means to be a family and have unconditional love for each other in 2020.”

The 39-year-old star further explained, “Representation is important. To me, it’s not a movie about a straight couple or a gay couple. It’s just a story about family and Christmas.”

There is one scene that meant the most to the entire cast and crew. Bennett shares that when they filmed one scene in particular, there was a lot of emotion. The lead up is the emotional adoption storyline. Jake and Brandon are going through an emotional moment. A very couple’s moment. But Jonathan Bennett shared that this tender moment was very meaningful to everyone on set. It was groundbreaking.

“Then we kiss. When the director yelled cut, there wasn’t a dry eye in the house. So many crew members came up to me and said, ‘Thank you so much for doing this and being a representation of what love is our community.’ I just felt so proud to be an actor in that moment.”

Ho! Ho! Holiday Viewing! posted on Twitter, reminding us that less than a year ago, Hallmark pulled ads featuring a same sex couple kissing. Hallmark has certainly come a long way in such a short period of time.

Reminder that this is where Hallmark Channel was as a company just 334 short days ago 👇https://t.co/pWOZVlr9IY

Jonathan Bennett Believes He Is ‘Part Of The Progress’

Over the years, Jonathan Bennett has played straight lead characters. When he was asked to do The Christmas House, he had asked who his leading lady was. When he found out that he would be in a same gender relationship, this was a huge deal.

“I wish I had a movie like this to watch when I was younger. I’m hoping all the young Jonathans, sitting there watching this with their family and parents, they might feel a little more seen and they are going to feel a little less scared this Christmas.”

Although Jonathan has mainly played straight roles, he is openly gay. Therefore, starring in this landmark Hallmark movie makes him “feel like I am part of the progress.”

Now @sharonlawrence knows what it would be like to raise a house full of boys like her character does in #TheChristmasHouse. Watch the chemistry and antics come to life on screen Nov. 22 at 8pm on @hallmarkchannel @Rtreatwilliams pic.twitter.com/GJxuL6Uky1

One of the main storylines in this breakthrough Hallmark Christmas movie is Brandon and Jake’s adoption. Coincidentally, Bennett’s husband in the movie had his own happy news to share during the filming. It was a bit like life imitating art.

Bennett shared, “Watching the joy on his face, when he would call his husband and talk about their family and the new baby, I really saw firsthand what it was like for someone going through this process, even though it’s different because it’s a surrogate versus adoption. It’s all the same thing. They are building their own family.”

Although Bennett and his partner Jaymes Vaughan have a dog, this role did make him think about a family. Maybe family will be in the future. Right now, the pair just bought their first house together.

Will they go out and turn this house into a winter wonderland? We will have to find out.

The Christmas House airs on The Hallmark Channel on Sunday, November 22, at 8 p.m. Eastern.