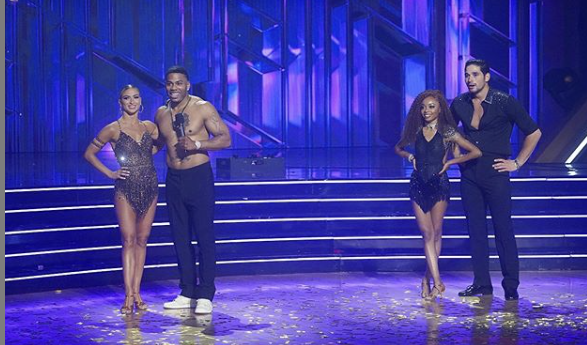 If you’re an avid Dancing With The Stars fan, you probably know about all the juicy rumors surrounding the castmates. But through thick and thin, DWTS pros stick together. You may be surprised to find that many popular rumors are just storylines and fan theories.

One thing is for certain — DWTS fans have no shortage of opinions. And they’ve been particularly vocal this year.

“We are more in the headlines this year than ever, I will say that,” judge Carrie Ann Inaba told ET this week. “We have been from the beginning, from once Tyra took over being our host and people having a lot of things to say. I like Tyra, and I translate that as good because people are passionate.”

She went on to say that people have been using social media as a sounding board to make themselves heard. Carrie Ann loves that people are so passionate about the show.

Pro dancer Alan Bersten is just happy he’s not involved in the gossip this year. In past seasons, fans speculated he could be linked to celebrity contestants, such as Hannah Brown and Alexis Ren. However, he’s eight years older than his partner this year, Skai Jackson. He’s thankful people aren’t spreading rumors about the two of them this year.

“I think there’s a lot of people that compare it to an arranged marriage,” Alan told ET. “You’re literally forced to be in a room with someone every single day for, like, five hours a day. And then on Mondays, you spend the whole day with this person. So, you either really enjoy each other’s company or you hate each other.”

The Dancers All Support One Another

If you pay attention, you can occasionally catch a glimpse of eliminated pros watching from the balconies. Some have spouses still in the competition, while others are just there to cheer on their friends. Jenna Johnson and her partner Nev Schulman are in the final six. Her husband, Val Chmerkovskiy, was eliminated from Dancing With The Stars a few weeks ago, but he still comes to cheer for Jenna and Nev.

“I am really grateful for the support system here. My best friends are on the show, so if anything would ever happen, I would immediately get a call or a text message from multiple people,” Jenna said about her DWTS castmates. “Also, when you’re eliminated as a pro, it’s discouraging … so I just want to thank the pros that have been eliminated for coming back every Monday night, giving us that support, cheering and having a smile on their face. I just really admire and appreciate them.”

Dancing With The Stars contestants are prepping for the semifinals this Monday night. You can tune in to ABC and catch all the drama and action at 8 PM eastern time. And as we previously reported, two couples are going home. Who do you think will stay and who will go home? Leave your ideas in the comments.