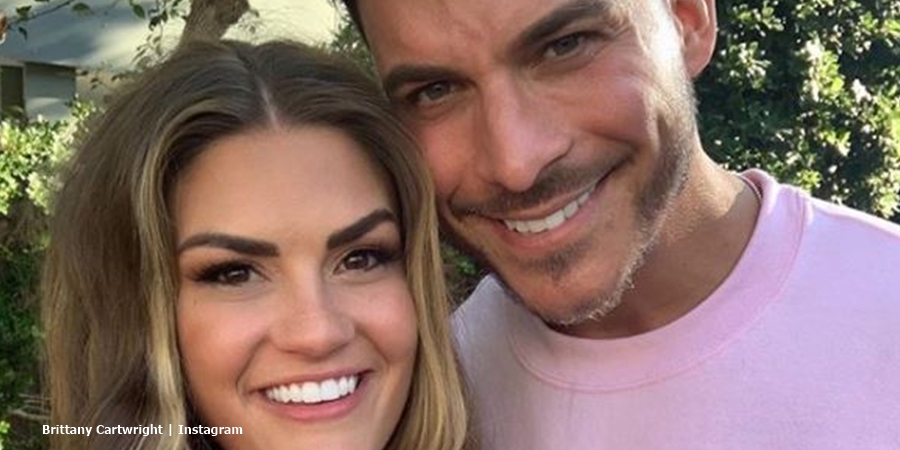 Brittany Cartwright and Jax Taylor expect their baby boy in April next year. Vanderpump Rules fans seem almost as excited as Jax about them becoming parents. After all, Jax wanted children and always hoped for loads of them. Meanwhile, Brittany looks like she glows with beauty as her pregnancy proceeds, fans think.

We reported that Brittany struggles with morning sickness at the moment. “She’s one part of the Pump Rules baby boom.” But, on Monday, November 2, Brittany spoke out about her “morning sickness.”  Nevertheless, she still “smiles” happily at the thought of her unborn baby growing inside her. But seriously, her morning sickness sounds quite a chore. She mentioned her “exhaustion,” and also killed the fallacy that it “only happens the morning.” And, some days, it pretty much lasts the whole time.

However, judging by a photo that Jax Taylor shared on Monday 11, you’d never know she nursed her way through so much discomfort. The Vanderpump Rules star posted a photo for their “date night.” Actually, the couple, looked fantastic, according to fans. Jax wore a black jacket, a black tee and black pants. Meanwhile, Brittany Cartwright also wore only back. Fans thought she looked amazing with her high-waisted outfit.

Bravo fans can’t get over how beautiful Brittany looks

Many fans spoke about Brittany. One of them said, “Beautiful couple! Brittany is glowing and so are you😜🥰.” Then, another fan noted, “@brittany with that pregnancy glow, you are stunning girl!! 💃🏽” Lots of fans agree with the concept of “stunning.” And yes, she “literally glows,” another fan wrote. Then, this fan wrote, “Beautiful photo. You can see how proud you both are to become parents and Brittany is glowing, she looks beautiful. I’m happy for you both.”

When fans talk about Brittany Cartwright “glowing,” it’s more than their imagination and good lighting. The Mayo Clinic notes that it’s a real phenomenon. Their website says, “a combination of factors” helps create that “pregnancy glow.” And, a “greater blood volume brings more blood to vessels, resulting in skin that looks flushed.” Plus, the “hormone levels” change a lot, which often results in glands in the skin secreting more oil. That brings out a “shinier” look.

The downside to the pregnancy glow

But like every silver lining, sometimes, there’s a price to pay. And, Brittany Cartwright might also expect an increased possibility of “acne.” Mind you, if she suffers from that right now, she skillfully hid it well. While pregnancy might make women feel really sick, and bring out acne, one big plus point is that very often they look amazingly beautiful as well.

What do you think of Brittany Cartwright in the photo that Jax shared? Do you agree that she looks very beautiful with that pregnancy glow? Sound off in the comments below.