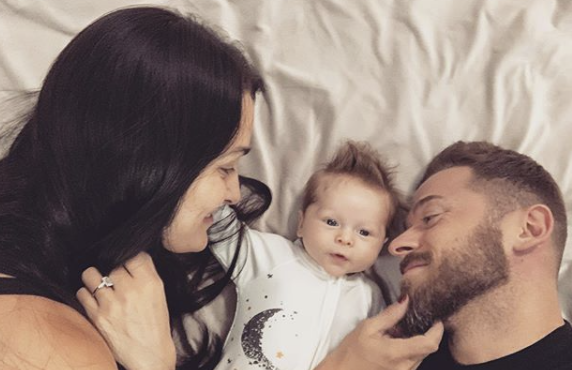 Every parent hopes their child might take after them someday. Matteo Chigvintev has two incredibly talented parents, so it’s hard to say who he may take after at this point. His father is Dancing With The Stars pro Artem Chigvintsev and his mother is WWE superstar Nikki Bella. Is Matteo more of a dancer or a wrestler?

Artem says he thinks it could go either way at this point. Matteo is apparently very athletic and is very strong for a 3-month-old. In the interview, he went on to say that Nikki considers returning to the ring someday and he would love to take Matteo.

“I’d love to be cheering in the front row sitting with Matteo on my lap … like, ‘Go, Mommy, go!’” he said. For the time being, Nikki and Matteo have lots of fun cheering Artem on from the sidelines.

Nikki And Matteo Want You To Vote For Artem

The Dancing With The Stars pro is headed toward the semifinals with his celebrity partner, Kaitlyn Bristowe. They’ve been extremely popular with fans since the beginning. On Monday night’s episode, they even earned a perfect score for their Argentine Tango.

Each Monday night, you can find Nikki Bella on social media asking fans to vote for Kaitlyn and Artem. She usually has Matteo by her side, using his sweet face to ask for votes.

Artem is so thankful to be part of the Season 29 cast. In case you didn’t know, DWTS execs cut him just before Season 28.

“There was never a thought in my mind that I’m not gonna be doing it,” Artem said during an episode of the “Total Bellas Podcast.” “There’s always a chance, as a pro, you might be doing some performances on the show and there’s still an involvement in some sort. But getting this call, [hearing], ‘There’s gonna be no involvement in the show from now on,’ it’s like going through a breakup after 10 years.”

He reportedly went through a deep depression after leaving the show. But anything seemed possible with Nikki by his side. Baby Matteo was born on July 31, and DWTS announced Artem’s return for Season 29 just a few weeks later. Things really seem to be going well for the little family. A Mirrorball Trophy would be the cherry on top of a perfect year.

Catch The Family In Action This Week

To see Matteo Chigvintsev’s talented father perform, tune in to Dancing With The Stars on Monday night at 8 PM eastern time on ABC. We’re headed into the semifinals and the competition is getting fierce. Do you think Artem will take the Mirrorball Trophy home? Let us know in the comments.

And while you’re waiting, Total Bellas returns to E! this Thursday at 9 PM eastern time. You can watch Nikki and Artem prepare to welcome Matteo into the world. You won’t want to miss out on this exciting season!