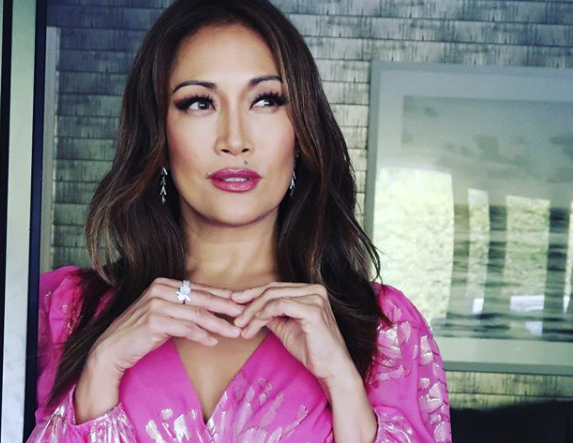 During Monday night’s episode of Dancing With The Stars, judges gave Kaitlyn Bristowe and Artem Chigvintsev their first perfect score. Even Carrie Ann Inaba had incredibly kind things to say as she gave them a standing ovation. Kaitlyn and Artem were so thrilled, they ran up to the judges’ table to hug her. She hugged them back, but fans couldn’t help but notice Carrie Ann looked a little uncomfortable.

Some fans suggested the look on her face had to do with her and Artem’s romantic past. But Carrie Ann assured everyone that wasn’t it. After all, we are still in the middle of a global pandemic. Contestants weren’t supposed to get near judges this season. Even the judges’ seats are spaced six feet apart. Social distancing is commonplace on the set.

“I went from joy and elation [over how well they’d done] to ‘Don’t come near me!'” the judge told the press after the episode. “I was like, ‘Oh, maybe this is a joke. Maybe they’re going to come over and then, not come over, but they came over, and [we hugged].”

Many fans accused Carrie Ann of purposefully being hard on Artem. She likely felt the need to clarify to stop rumors from flying further.

Everyone involved with the show is regularly tested for COVID-19. However, it’s easy to see why Carrie Ann Inaba was a little surprised at first. For months, we’ve been discouraged from hugging people who aren’t in our immediate families. It seems that Kaitlyn and Artem’s excitement simply got the better of them.

The Group Agrees To Bury The Hatchet

“It’s funny,” Kaitlyn said after the show. “I feel like we’ve just been at this standstill with Carrie where it was like, ‘What do you want from us?’ This week, we all had this understanding that we’ve worked hard to have this breakthrough. We [saw] that her tough comments have probably gotten us to where we are right now so, let’s all hug it out.”

Carrie Ann went on to tell the press that she meant every word she said and that Kaitlyn and Artem absolutely deserved their perfect score. If you missed out on last week’s episode, you can catch their amazing routine right here:

And with that, it seems like one dramatic chapter of Dancing With The Stars is over. However, anything can happen. We’re heading into week 10 and plenty of exciting things could happen.

Tune in to ABC at 8 PM eastern time on Monday to catch the semifinals. Kaitlyn and Artem are in the top six and have a real shot at taking home the Mirrorball Trophy. But they can’t do it unless you vote for them.

Charli D’Amelio Hopes To Reconnect With Herself During ‘DWTS’
Tiffany Bates’ Fashion Choices Shock Fans
Zach ShallCross Opens Up About His Role As ‘The Bachelor’
‘The View’ Sunny Hostin Attacks Ana Navarro, Whoopi Breaks It Up
Lydia Plath Changes Tune Amid Criticism For Celebrating Civil War