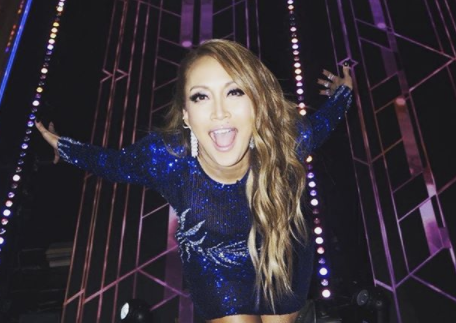 You may not know this, but Carrie Ann Inaba and Artem Chigvintsev used to date. They were together for almost three years from 2006-2009. They say it’s all water under the bridge, but many Dancing With The Stars fans think their past is getting in the way of Carrie Ann’s job as a judge.

For several weeks in a row, Carrie Ann gave really harsh criticism to Artem and his celebrity partner, Kaitlyn Bristowe. Artem even admitted her words started to feel a little bit too “personal.” Of course, this only encouraged gossip. However, Carrie Ann hopes to put those rumors to bed.

“I think it’s hysterical. You know what I love though? This is what I love about the Bachelor fans and Bachelorette fans. They can create a story around it! And it’s weird because I totally understood what they were doing. They’re like, there’s jealousy there and there’s this and that because that’s what the Bachelor and Bachelorette is all about, right? It’s about creating stories about everybody. Look, I love Artem, I respect him, I love him and Nikki [Bella] together. I love that they just had their little baby Matteo,” Carrie Ann told Us Weekly after last night’s episode.

“We’ve had Nikki on The Talk, I’m a huge fan. There’s nothing but love and I thought it was hysterical. So none of it bothers me. I know that people are passionate about Dancing With the Stars. They’re passionate about who they’re voting for. I love that. I will not stand for bullying of me or anyone. … We’ve had enough of it in our country. I’m sick of it. I’m never gonna stand for that, I’m never gonna support it. But I am OK with passion and I am OK with discussion.”

Discussion Is Welcome … As Long As It’s Kind

Carrie Ann went on to say that some fans even DM her and want to have a discussion about her scoring methods. As long as they ask politely and don’t bully, she is happy to discuss.

She said she has received a lot of private messages about Artem and Kaitlyn. They were from people wanting to open up a dialogue about the situation. There wasn’t name calling or bullying. She even said she spent a lot of time writing to them.

“And then Artem was passionate about what he wants, which I can appreciate. So you know, it’s OK. It’s passion. How you direct your passion though, not only here on Dancing With the Stars but in the world in general, we all need to be careful with and we need to check ourselves. Dialogue and trying to understand the other person’s point of view is very important to me. So I don’t appreciate people calling names and things like that. It’s not helpful. But am I interested in your perspective? Yes. Always. … But I gotta do my job! I’m a judge!”

Dancing With The Stars returns on Monday night for the semi-finals. Tune in and see what happens next!