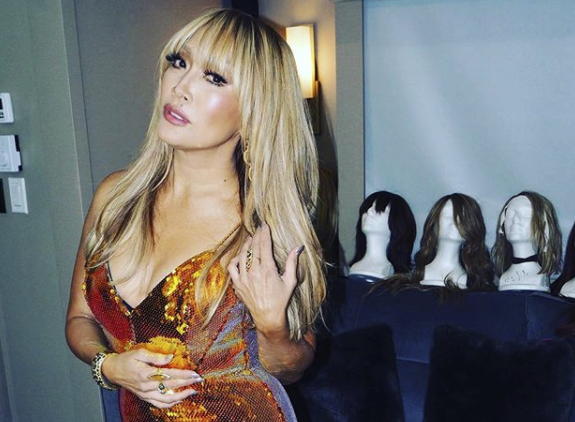 Talk show host Wendy Williams feels very strongly about issues on Dancing With The Stars this season. On her show last Friday, she took the time to comment on the boiling tension between judge Carrie Ann Inaba and competitor Kaitlyn Bristowe.

The talk show host says that she thinks Carrie Ann feels “strained” these days and is taking her frustration out on anyone she can. Unfortunately, Kaitlyn Bristowe seems to get the bulk of it. Wendy went on to joke that maybe Carrie Ann should just sleep more.

A few weeks ago, Carrie Ann Inaba complained that she feels bullied by people on the internet who don’t agree with her. And most of the fandom has a problem with Carrie Ann’s comments.

“I still get bullied. Right about this time is when people start to bully me because of the way I judge people. I can’t believe it still happens as adults,” the DWTS judge said recently. “I want to tell people who bully: It doesn’t make me change the way I judge. I’m not about to change because you try to bully me. It only makes me stand stronger in my convictions and what I believe in.”

It’s clear Carrie Ann doesn’t think she did anything wrong. She recently retweeted an article that discussed the alleged bullying.

“Just so you all know, for all of you trying to bully me about it, I judge the way I judge from my background,” she added. “That is my job to do it and I will always do it based on my own conscience, not because you’re trying to tell me what to do.”

“What world is she living in?” Wendy asked.

Wendy Williams Isn’t The Only One Speaking Out

“At this point right now we just feel like we’re never going to make her happy. It feels really discouraging, in a sense, to come back next week,” Artem said in a recent interview. “I was literally wanting to have ear muffs and put it on top of [Kaitlyn’s] head.”

Some fans pointed out that Carrie Ann and Artem used to date back in the mid-2000s. Could it be that Carrie Ann’s real problem is with Artem? Let us know what you think.

Dancing With The Stars comes back for Icon Night tomorrow. Make sure to tune in and catch all the exciting action. Hopefully, Kaitlyn and Artem will have a routine that will finally make Carrie Ann Inaba happy. Let us know what you think of the season so far. We always want to hear from you.

‘The View’ Joy Behar Mocks Celebrity, Gets Called Out By Co-Host
Teresa Giudice Said One ‘DWTS’ Judge Had It Out For Her
‘Big Brother’ Who Is Monte Actually Loyal To?
‘Today’ Hoda Kotb Struggling With Day Job Amid Feud?
‘Shadow House’ Season 2, Episode 10: Eng Dub Release Date?