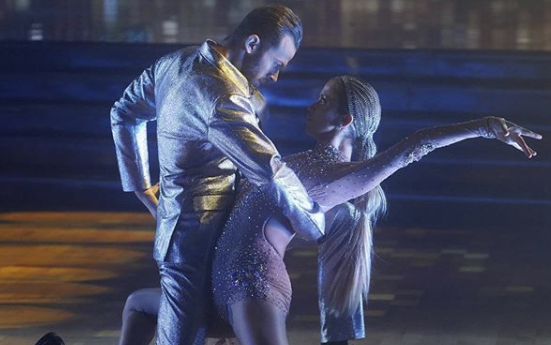 It seems like Kaitlyn Bristowe and Carrie Ann Inaba finally see eye-to-eye. During this week’s episode, Kaitlyn and her pro partner, Artem Chigvintsev, gave their performance everything they had. And it certainly paid off. The pair pulled off a perfect score for their Argentine Tango to “Toxic” by Britney Spears.

For weeks, Carrie Ann Inaba seemed to be particularly rough with Kaitlyn. Fans felt the judge kept underscoring the former Bachelorette, and unfortunately, that led to a lot of cyberbullying.

“Carrie Ann is totally allowed her opinions. I’m allowed to not agree with them or feel hurt by them, but it doesn’t mean people need to go and bully on her,” Kaitlyn defended the judge during an episode of her podcast. “I heard that she feels bullied and that makes me feel so terrible because I’ve been bullied so hard online.”

And even though they’ve had their differences, the pair seemed to bury the hatchet during this week’s episode. Carrie Ann gave high praise to Kaitlyn and Artem for their routine and even a standing ovation.

“We push you because we want you to reach your ultimate,” Carrie Ann told the pair. “Everything about it was amazing … everything we’ve been wanting from you was in this routine.”

They ran up to hug her afterward. The judges agreed unanimously that Kaitlyn and Artem deserved a perfect score.

Kaitlyn Bristowe admitted she has a deep-seated admiration for Britney Spears. She practically begged the show to let her choose Britney for Icon Night.

“I’ve loved Britney. I always joke and tell people I was on the six o’clock news in my hometown for being a Britney fan. Like, I made a whole video of finding a fake snake to go to her concert. I’ve just always loved her performances, her dancing, her singing. I just think she is an icon,” the former Bachelorette told ET.

Many people were surprised that Carrie Ann was so kind to Kaitlyn and Artem tonight, but the praise didn’t stop after their first routine.

During the dance-off portion of the night, Kaitlyn and Artem went toe-to-toe with Justina Machado and Sasha Farber. Judges Derek Hough and Bruno Tonioli decided that Justina won the dance-off, but Carrie Ann gave her vote to Kaitlyn. That’s certainly a different story than last week.

Do you think Kaitlyn will continue to get the judges’ praise? Let us know what you think in the comments. Who do you think will win the Mirrorball Trophy overall? There are so many great competitors still in the competition. Stick around to find out.