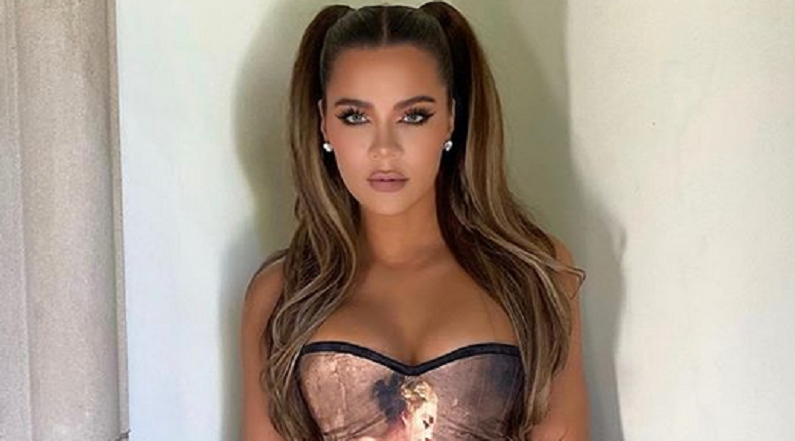 Khloe Kardashian posted a series of bikini photos on Instagram. However, there is one post in which her followers ended up trolling her. On Wednesday, October 28, the Keeping Up With the Kardashians star shared the photos from her island getaway. It’s the same infamous getaway where Kim Kardashian’s 40th birthday party took place.

As TV Shows Ace previously reported, Khloe defended Kim. Most of the Kardashian-Jenner clan feel they have every right to travel and party amid the pandemic. Fans were shocked to learn that Khloe was diagnosed with COVID-19 earlier this year. However, that didn’t stop her from traveling to the beach.

The Good American founder didn’t get the reaction she expected. In her latest Instagram post, she shared a photo of herself in a white kayak. Khloe Kardashian holds both of her arms up in the air and gives the peace sign. In the caption, she wrote that she’s “💙 At Peace. 💙”

But from what? Fans took to the comments section to fill in the blanks. And some of them produced hilarious results.

“At peace? With Tristan?” one follower asked. “While the rest of the world is in flames,” another added. A third user chimed in: “with covid?”

But it wasn’t all jokes in the comments. Some of Khloe’s friends and family showed their support. Mom Kris Jenner wrote: “What a cutie.” Meanwhile, friend Ash Kholm told Khloe, “You deserve it all!!”

Others wanted to know where Khloe and her family traveled to. But the family wouldn’t reveal those details. Of course, there was one fan who claimed they couldn’t recognize her. The troll asked: “Who TF is this?”

Previously, Khloe Kardashian shared several photos from her secret getaway. In the series of sizzling photos, she wore a hot pink Chanel bikini that featured a bandana print. Khloe posed seductively in the beautiful clear blue waters in the tropical location of the surprise celebration. She showed off her famous curves in the sultry post and captioned it: “💛 BEST TRIP EVER!! Thank you Keeks 💛.”

Khloe is known for her Revenge Body. She decided to show off the results she made at the gym. But interestingly enough, she also turned off the comments for that post. The E! star probably didn’t want any comments about her body.

Her followers are always talking about her looks in her photos. They claim that she changes her face on a regular basis. Some are even concerned about the amount of plastic surgery that Khloe has done to her face. Khloe has since fought back at the allegations and claims she hasn’t had any work done.