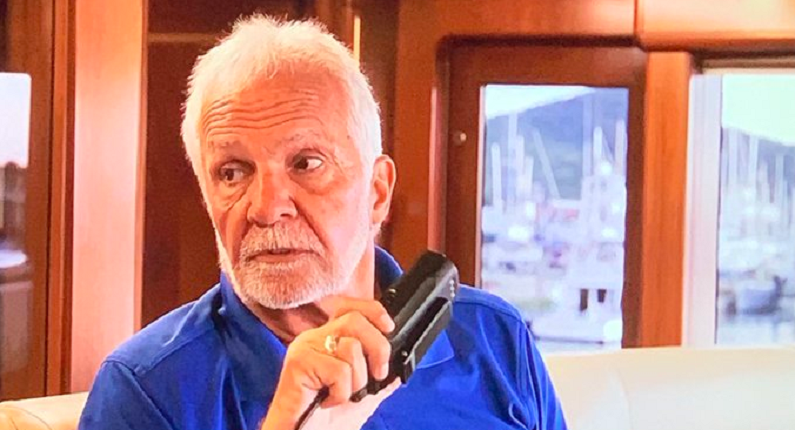 Below Deck star Captain Lee Rosbach is making his big return. Fans are looking forward to him after a dramatic season of Below Deck Mediterranean. The original series is setting sail in November. It’s the first time that the show will not include former chief stew Kate Chastain.

It’s also the first time that the crew tackles the coronavirus pandemic. Apparently, there are a lot of firsts in season 8. Captain Lee promised that it will be packed with drama. He also teased a major first for the reality series. Fans might be shocked to learn what happens on board the My Senna.

Some of the charter guests end up in hijinks.

Captain Lee reveals a major first in Below Deck history

In an exclusive interview with E! News, Below Deck star Captain Lee talked about some of the drama coming to the season. It’s going to be an intense one for both the crew members and the charter guests. A trailer revealed that the captain threatens to end someone’s charter.

“Get your goddamn a** back to this boat, now,” Captain Lee tells an unidentified person. “Your charter just ended.”

He kicks off an unruly charter guest. Or, at least that’s what it seems. The long-time captain wouldn’t reveal the details to E! News. Instead, he remained tight-lipped on what happens.

“Now, how do you know it was a guest?” Lee coyly said. “I could’ve been talking to a crew member, but I’m not gonna spoil anything.”

However, he did hint that it was the first for his charter. It’s likely that he kicked off a charter guest in the middle of a charter. It was unheard of until now.

“I will tell you this, it is something I have never, ever done in 35 years of yachting,” he said. “Until now. It’s never, ever happened to me before. That is a first.”

Of course, that wasn’t the only scene featured in the trailer. There is plenty more drama coming to Below Deck Season 8. Some of the most dramatic moments include crew hookups, mass firings, and chief stews crying. As previously mentioned, this is the first time that Kate Chastain will not appear as the main chief stew.

Earlier this year, she announced her departure from the show. Lee said her presence was missed while filming the eighth season.

“Kate was such a presence and to say that she wasn’t going to be missed would be a misstatement,” Captain Lee said. “I’m very happy for what she’s doing now, and it was time for her to move on…Whatever makes her happy, we were all in for.”

However, Lee is happy about Kate’s replacement, Francesca Rubi. While the new Below Deck chief stew had “big shoes to fill,” Lee called her “a hard-working girl” who “knew her stuff.”

“I was very pleased with her,” he added.

Although Kate is gone, one familiar face has joined the crew. Original cast member and bosun Eddie Lucas makes his return. Lee made it clear that Eddie changed since first joining the show.

“His maturation level has increased exponentially to where he’s right up there,” Lee said. “I think he’s come leaps and bounds from the last time he and I worked together and I’m just very proud of him.”