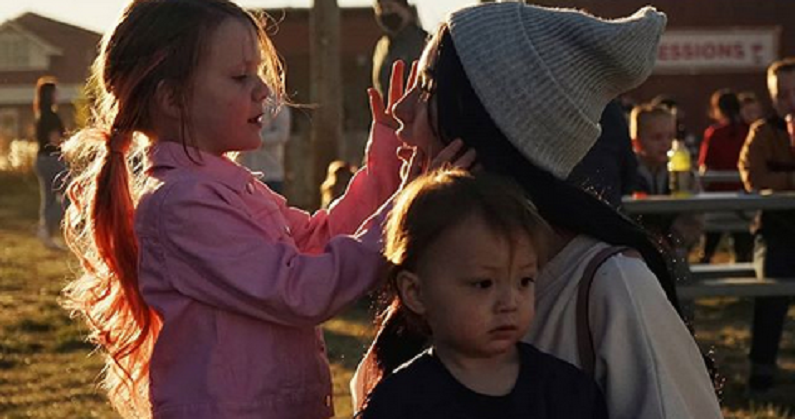 90 Day Fiance star Deavan Clegg has become the center of animal abuse claims. TLC fans are on the attack after her daughter Drascilla swung her new dog around on her Instagram Stories. But it’s not the same fur baby that fans were introduced to on Sunday night’s episode of The Other Way. Viewers didn’t feel right when the dog sat in Drascilla’s lap.

Now, they’re not liking how her daughter is playing with their latest pooch. They blamed Deavan for allowing this behavior. Deavan has repeatedly asked her fans to stop judging her parenting skills and her daughter. But from the start, viewers noticed the lack of discipline. Recently, Deavan came under fire for allowing the 5-year-old to treat the puppy harshly.

The 90 Day Fiance star shared her makeup routine on her Instagram Story. Deavan shared her everyday routine with her fans. But fans weren’t paying attention to her makeup skills. They were focused on Drascilla, who was playing rough house in the background. As per Screen Rant, she swung and tossed around the little puppy.

She swung his legs so hard that fans could see the spine curve and the legs go over its head. Deavan even laughed as her daughter treated the puppy like a toy. The TLC star looked into the phone and said, “Kids.” However, fans were shocked to see Deavan allowed her daughter to treat their dog like a rag doll. Some even found the video to be disturbing.

Birthday girl 💕💕💕 went to the Dinosaur Park today. She had a blast 😍 such a great time #90dayfiance #90dayfiancetheotherway #dinosaur #dinosaurpark

Most of the guilt fell on Deavan’s shoulders. The mother of two has been slammed in the past for her lack of parenting. Drascilla learned that behavior from her mother because she gets away with anything. Instead of disciplining her daughter, Deavan took to Instagarm to inform followers to stop reporting her account.

“You do know Koreans eat dog right,” she asked. She also claimed that Jihoon never cared about Bam Bam and tried to give him away. However, Jihoon has a different story to tell.

90 Day Fiance star accuses Deavan of beating up their dog

Jihoon previously claimed that Bam Bam relocated to a new home. The dog that Deavan used to share with her ex-husband is no longer around. The 90 Day Fiance star said that the new dog was relocated because Drascilla abused him. Deavan slammed Jihoon’s claim in their ongoing social media battle.

“Jihoon gave Bam Bam away when he had a fit of anger,” the television personality said. “He didn’t want the two dogs and would get angry that Bam Bam got more attention than his poodle. Bam Bam did go to a loving home.”

Today is a sad day… our cat George passed away. He was Drascilla’s bestfriend. She was so excited to see him. It’s so sad we won’t be able to see him.

In Touch Weekly reported that Jihoon claimed that “Bam Bam go to [a] new family January 18, 2020 because Little D beat Bam Bam” in his Instagram Story. He also added that the dog “lost a lot of hair and it wasn’t good for the baby’s trachea.” Deavan responded in a separate Instagram Story claiming that Jihoon was “making up lies to make my child look bad.”