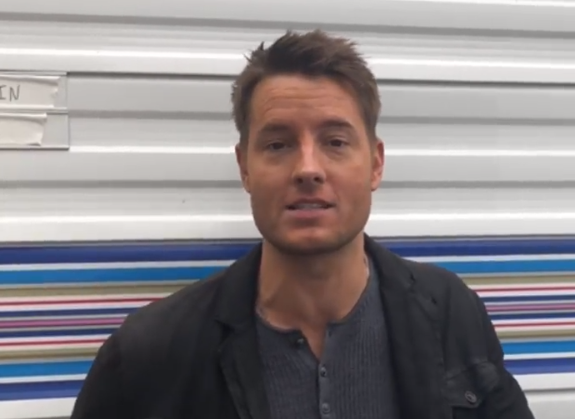 By now, you’ve probably heard the rumors about Justin Hartley and Chrishell Stause’s high-profile divorce. He allegedly asked her for a divorce through a text message, a plotline that Selling Sunset fans found shocking. However, no matter what you hear, Justin Hartley wants everyone to be cautious about what they believe.

“I think people want to know about other people’s personal affairs, but it’s just, I would just caution people,” Justin Hartley said on a SiriusXM radio show this week. He says that he even told his daughter that she can’t believe something just because someone put it online for the world to see.

But even amid all the rumors, the This Is Us star says he’s in a very good place right now.

Just Hartley Just Wants To Put The Past Behind Him

“I’m really happy with where I am,” Hartley continued. He says his career and personal life are in excellent shape and that he is healthy and safe. Hartley is very thankful to explore this new chapter of his life.

Every single day is #nationaldogday

He went on to say that at the end of the day, fans will believe whatever they want to believe. But even so, he wants to be private about his personal affairs.

Sources close to Justin Hartley said that the star is “irritated” that their divorce was a storyline on Selling Sunset. Apparently, there is more to the story than what is being told. According to Hartley’s friends, Chrishell became very jealous of his co-stars.  But if Hartley isn’t willing to share his side, then many people are inclined to believe Chrishell.

Both Are Moving On Following Their Split

These days, Justin Hartley is dating his former Young and the Restless co-star, Sofia Pernas. Knowing this, it seems that perhaps Chrishell had a right to be jealous.

Chrishell is single, but we previously wrote how she is open to dating again. That is, once Dancing With The Stars is over. She and her partner Gleb Savchenko may be at the bottom of the leader board right now, but they definitely deserve a reward for most improved. They come back stronger than ever with each passing week. Chrishell said during segments that she sometimes draws on the pain of her divorce to fuel her emotion during performances.

So who do you believe? Are you team Justin or team Chrishell? Or perhaps there is more to the story that no one really knows about. Either way, leave your opinions in the comments.

If you want to see Chrishell perform, be sure to tune in to Dancing With The Stars at 8 PM eastern time on Monday nights on ABC.

If you can’t wait for This Is Us to return, you’re in luck. The season premiere is scheduled for October 27 with a two-hour event. Tune in and watch Justin Hartley and the rest of the star-studded cast.

Follow us on social media for more exciting articles.