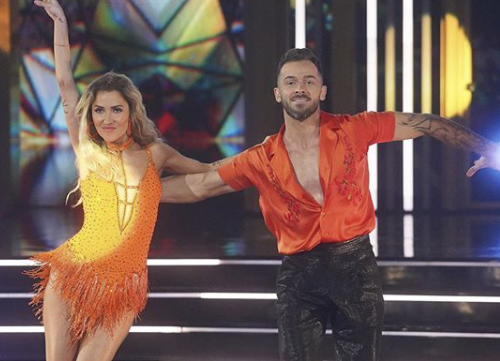 If you caught Dancing With The Stars this week, you saw Kaitlyn Bristowe and Artem Chigvintsev perform a Samba to “Sorry” by Justin Bieber. And Kaitlyn totally had a fan girl moment.

“This is gonna get really creepy, but I always have dreams that I’m friends with him, I really do,” the former Bachelorette said in a rehearsal session. “I’ve always brooded for Justin. I don’t know if it’s the Canadian in me or just like understanding going through what’s he’s gone through at his age and what his fame and fortune and everything [have done]. I’ve just always rooted for him and thought he came through it in such a wonderful way.”

Kaitlyn Bristowe Loves Justin Bieber, But Isn’t In Love With Him

So should her boyfriend Jason Tartick be worried? Kaitlyn says no. She says her obsession with Justin Bieber isn’t romantic at all.

But. what is it about Justin Bieber that makes him so attractive? According to Kaitlyn, it’s his tattoos that really do it for her.

“I love that he’s just covered in tattoos, and I want to get Bieber’s face tattooed on me,” Kaitlyn told Artem in the rehearsal room. “He’s that cute.”

She joked that if Justin Bieber tweeted about her performance, another tattoo was in order. Kaitlyn has nine tattoos already, but she would immediately go out and get his face tattooed somewhere on her body.

Kaitlyn and Artem’s Samba earned high marks from the judges. They each gave the couple a 9 for a combined total of 27 points. However, Carrie Ann Inaba pointed out that it was just lacking something overall. She noted that it was well executed technically, but it just lacked emotion and feeling.

We recently wrote about how fans wonder if Kaitlyn Bristowe is feeling burnt out. Do you think her performance reflects those feelings?

If you missed out on their performance, you can watch that here:

Kaitlyn plans to work hard and come back stronger than ever for Villain’s Night next week, just in time for Halloween. What song would you like to see her perform to? Kaitlyn and Artem have the Paso Doble next week, which is one of the more challenging routines. Will they be able to pull it off?

Their 80s Night performance was absolutely phenomenal and was going to be hard to top as it was. Do you think Kaitlyn and Artem can bring the same energy and have a great week next week? Let us know what you think.

Kaitlyn and Artem currently top the leader board with an average score of 24 points. If you want to keep them in the competition, you’ll have to vote. Next week is Villain’s Night and it’s sure to be a very spooky performance.

Dancing With The Stars airs new episodes at 8 PM eastern time Monday nights on ABC. Tune in and don’t miss another exciting episode. Let us know who you’re cheering for in the comments!