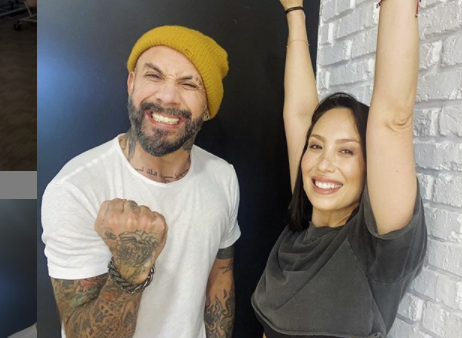 Many celebrities struggle with addiction. Backstreet Boy AJ McLean recently opened up about his own issues and how his bandmates helped piece him back together.

“They basically broke into my house and they dumped ice water on me while I was passed out in my bed. Everybody started to catch on,” McLean said in an interview with Good Morning America. “I wasn’t me anymore. I was just living a lie.”

For 20 long years, he’s battled his addiction off and on. The very first time he tried drugs was shortly before the Backstreet Boys filmed their 2001 music video for “The Call.” McLean described his behavior as “off the walls.” Even 11 months ago, he was having trouble staying sober.

AJ McLean Wants To Stay Sober For His Family

“And the turning point for me was when I came back home, my wife could smell it on my breath and my youngest of my two daughters would not sit with me,” he recalled. But fortunately, he found the motivation to get clean. “There’s too much to live for today. My beautiful children, my amazing wife, my career, my brothers, I’ve never felt more grounded that I do today.”

Competing on Dancing With The Stars is definitely helping AJ McLean commit to sobriety. With all the intense exercise and long rehearsals, he has something positive to focus on.

“It felt great connecting to my Latin roots with a spicy samba, and it felt even greater leaving the dancefloor feeling so proud of what we accomplished together,” the singer said in a touching Instagram post. “I am so grateful to have found a true friend in Cheryl [Burke], the best coach I could have asked for. Thank you all so much for the love.”

Highest personal scores of the season?! We like it like that!! @cherylburke and I turned up the heat last night on #DWTS! 🌶 It felt great connecting to my Latin roots with a spicy samba, and it felt even greater leaving the dancefloor feeling so proud of what we accomplished together. I am so grateful to have found a true friend in Cheryl, the best coach I could have asked for. Thank you all so much for the love for last night’s performance, and thank you for voting us through!!! On to week 7!!! Watch our full performance by following the link in my stories!! #TeamPrettyMessedUp @dancingabc

Cheryl Burke Helps Him On His Journey

AJ’s professional partner, Cheryl Burke, also struggles with addiction. In the past she’s battled alcoholism, but says she has been sober for the past two years. It really seems the two share a deep bond on and off the dance floor. Each and every week, AJ and Cheryl give it their performance everything they have.

If you enjoy watching them on the floor, you should follow them on social media too. They’re always posting sweet photos of each other on Instagram.

WHAT TEAM!? #TeamPrettyMessedUp is a team I never knew I needed to be a part of but it has become such a huge part of my life. Cheryl is a force, a ball of passion, a leader and has become a dear friend. Tonight we showcase our friendship in the ballroom in a dance dedicated to each other. Can’t wait for you guys to see it! And don’t forget to VOTE!! Text AJ to 21523 and vote online at http://dwtsvote.abc.com, 10x each! Voting opens at 8pm ET/7pm CT/5pm PT and ends after the last dance during the east coast airing. Thank you guys for your continuous love and support!! #DWTS

Last week, AJ and Cheryl had a personal best for their Samba which earned them 27 total points. That’s the most they’ve scored so far. Check back in next week to see if they can score even higher.

If you want AJ McLean and Cheryl Burke to stay in the competition, be sure to vote for them. Dancing With The Stars returns with an all new episode on Monday night. Don’t miss out!