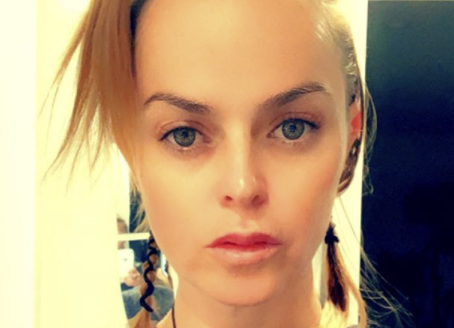 Orange Is The New Black actress Taryn Manning is getting a bit of a sour reputation around Hollywood these days. In a Season 16 episode of Worst Cooks In America, she refused to participate in a challenge and walked off the set, quitting the competition. And then there was that bizarre Instagram post about how none of her OITNB co-stars care about her. Now, it seems she’s starting something with the Dancing With The Stars staff.

“I’ve been asked to be on Dancing With the Stars many times. I have this weird phobia that [competing on the show] means you’re a has-been, and I never want to believe that’s the case,” Taryn said in a recent interview. However, the Dancing With The Stars team denied these claims.

“Taryn claims she’s been asked to join the cast ‘many times,’ however, we have never asked Taryn to be part of the show,” a source that works closely with production said. “Her representation attempted to pitch her to us a while back and we kindly passed. So her claim that she was asked to join DWTS once, never mind many times, is completely false. Her thoughts that the contestants consist of ‘has-beens’ seems to be her own projection onto talent that we have asked to cast.”

Dancing With The Stars said before that they rarely take people who ask to be on the show. Perhaps this is why they passed on Taryn Manning. But it could also be that they’ve heard she’s difficult to work with.

Rumors persisted over the summer that the popular dance competition show had trouble finding celebrity talent to work with. If this is true and they still passed on Taryn anyway, that’s pretty telling.

This week, Taryn posted a short Instagram video with a caption trashing Hollywood. Part of it reads, “Hollywood I dislike you so much and how many people you have hurt and destroyed, though at times you have paid my bills still…
You have tortured me and my pals and made me feel less than!”

This is what I am being subjected to so I can get a “part” Hollywood I dislike you so much and how many people you have hurt and destroyed, though at times you have paid my bills still… You have tortured me and my pals and made me feel less than! #hollywood maybe I need a fake arse? #done #savethechildren #vegan #nomoretortureandkillings

Either way, it seems like Dancing With The Stars will do just fine without Taryn Manning. The show shook things up for Season 29, but ratings are just fine and the competition is fierce. Have you been watching? Former Bachelorette Kaitlyn Bristowe and Artem Chigvintsev top the leaderboard. But there are a few other couples hot on their heels. If Taryn ever hoped to become part of the cast someday, she likely just blew her chance.

To see what’s happening on DWTS, make sure to tune in to ABC at 8 PM eastern time on Monday night.