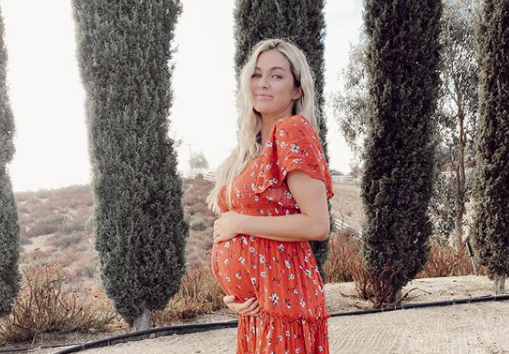 Dancing With The Stars pro Lindsay Arnold is sitting this season out. Her fans miss her, but definitely understand. She and her husband, Samuel Cusick, are expecting a baby girl. And Lindsay is due in November. The Season 25 champion recently shared a baby bump update photo and revealed that she is at 37 weeks. Just a few more weeks to go!

“37 weeks 💕 getting so close to meeting our baby girl and I cannot handle the excitement I am feeling, we love you so much little one 💕💕 #pregnant #37weekspregnant
📷: @paigemckenzi you are amazing!!”

37 weeks 💕 getting so close to meeting our baby girl and I cannot handle the excitement I am feeling, we love you so much little one 💕💕 #pregnant #37weekspregnant 📷: @paigemckenzi you are amazing!!

If you follow Lindsay on Instagram, it’s clear she misses competing on Dancing With The Stars. Each Monday night, she cheers her friends on from the comfort of her living room, as revealed by her Instagram stories.

“I’ll have our baby in November, which gives me about 10 months to have time with the little babe, and then get back into shape and get back into dancing to hopefully be back around for the next fall season,” the 26-year-old said back in May. “That’s sort of the plan, and that’s what I intend to do. I have every intention of coming back. I mean, I love that show, I can’t see me not wanting to be a part of it in some way for the rest of my life as long as they will have me.”

After all, Peta Murgatroyd makes it work. She and former DWTS pro Maksim Chmerkovskiy are the parents of a three-year-old little boy, Shai. Maks retired from the show, but Peta still competes. There is still plenty of time for Lindsay to return to the stage and compete for the Mirrorball Trophy.

A Big Year For Dancing With The Stars Babies

If you’re missing Lindsay, you’re also probably missing Witney Carson. The two women have been thick as thieves for years and you probably noticed Witney isn’t competing this season either. Witney is also expecting her first child, a son. She is due in January and is more comfortable watching from home this year too.

26 weeks of carrying baby boy ✨🌙 He kicks me nonstop and is such a night owl (just like his mama), he’s got a huge appetite and is getting bigger by the day! I’m enjoying every ache & pain, and jab to the ribs because he’s so worth it. #BabyMcAllister

It’s been a big year for the DWTS pros and their families. Artem Chigvintsev became a father over the summer. Jenna Johnson and Val Chmerkovskiy are eager to become parents someday soon, and Peta and Maks confirmed they would like a second child. Jenna previously joked that she and Peta have a pregnancy pact. If they both sit out next year, there will definitely be room for Witney and Lindsay to come back.

Keep checking back with us for updates on Lindsay Arnold’s pregnancy. We’ll be the first to let you know as soon as we know more. Which day do you think she will have her daughter? Leave your guesses in the comments.

Who Is The New Voice Of ‘Rick And Morty’?
Fans Rip Clueless Savannah Chrisley For Ignoring The Facts
Is Amazon Prime’s ‘Daisy Jones & The Six’ Based On True Story?
Jay Leno Smashed In Motorcycle Accident Amid Series Cancelation
‘Farmer Wants A Wife’ Sneak Peek Of Fox’s New Dating Show