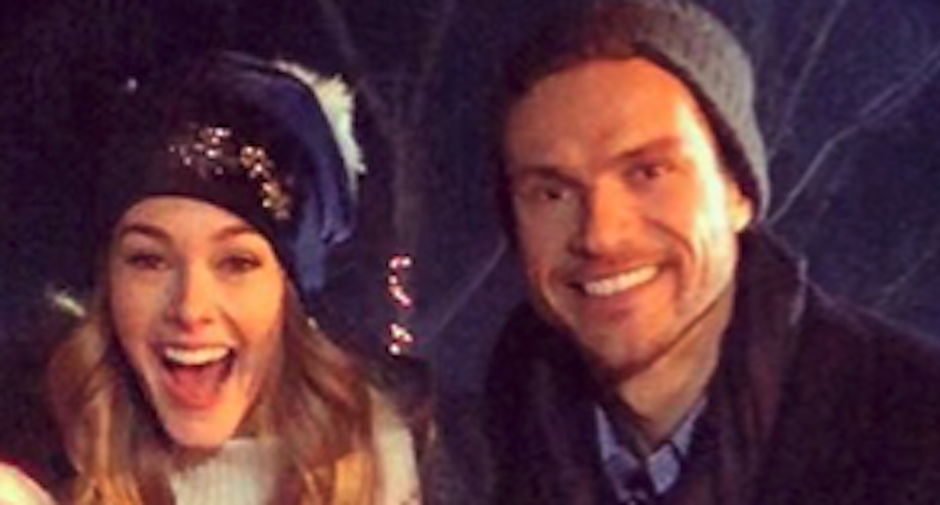 Moreover, It’s A Wonderful Lifetime is kicking off on Friday October 23 with the movie Christmas On Ice. Starring Abigail Klein (Transformers: Age Of Extinction), Ryan Cooper (One Life To Live), Caroline Portu (The Society), and Will Lyman (Mystic River), we learn if a skating hopeful and a hockey player can change a Scrooge’s heart and save an ice skating rink.

What Is Lifetime’s Christmas On Ice About?

Former United States figure skating hopeful, Courtney Bennett (Klein), is in charge of the city’s public skating rink. She runs into a real-life Scrooge when the mayor (Lyman) has made an announcement that the rink is closing. And the mayor is doing this during Christmas!

Courtney wants to fight to keep the rink. Emotional, the skating rink is where she spent a good part of her youth. She Is heartbroken that other kids will lose the chance of fulfilling their skating dreams. But, Courtney cannot do this alone.

She gets former professional hockey player,  Noah Tremblay (Cooper), to help her out. The single dad owns the town’s new indoor skating rink. She convinces him that they can “save the oval.” Together, they work to make this happen.

While working on this project, they enjoy some traditional holiday escapades and grow closer. Courtney also gets closer to Noah’s daughter, Grace (Meara Mahoney Gross). Grace has her own skating dreams. Can Courtney and Noah save the rink and find each other?

Well, in the Lifetime preview, Noah does say, “This has been my best Christmas ever.” But you better watch to make sure they end up together!

The original name of Christmas On Ice was A Christmas Pirouette.

When Can You Watch Lifetime’s Christmas On Ice?

It’s A Wonderful Lifetime kicks off on Friday, October 23, at 8 p.m. Eastern time.  And it is kicking off with Christmas On Ice! How great is this? It will be repeated throughout the Christmas holiday. Be sure to check Lifetime’s listings to catch an encore performance as well.

According to This Week In Worcester,  Christmas On Ice was filmed in Worcester Massachusettes in mid-February 2020. They filmed the movie at several locations, including the Worcester Common Oval, City Hall, the Fidelity Bank Worcester Ice Center.

#ChristmasonIce Premiers 23rd of October 8:30pm on @lifetimetv and kicks off their Whole Christmas line up till when Santa sneaks into your house while you’re sleeping…. And makes out with your mum. #isawmummykissingsantaclaus Had the best time again with the Massachusetts team! #cooperchristmas

It’s A Wonderful Lifetime Movies To Look Forward To

It’s a Wonderful Lifetime 2020 will include 30 brand new holiday movies to enjoy throughout the holiday season. Don’t forget to catch The Christmas Setup. This is Lifetime’s first movie with LGBTQ lead actors.

Best of all, The Christmas Setup stars real-life couple, Ben Lewis (Arrow) and Blake Lee (Parks and Recreation), and The Nanny herself, Fran Drescher! This movie will air on Friday, December 12, on Lifetime.

Christmas on Ice premieres Friday, October 23 at 8 p.m. Eastern, on the Lifetime Channel.