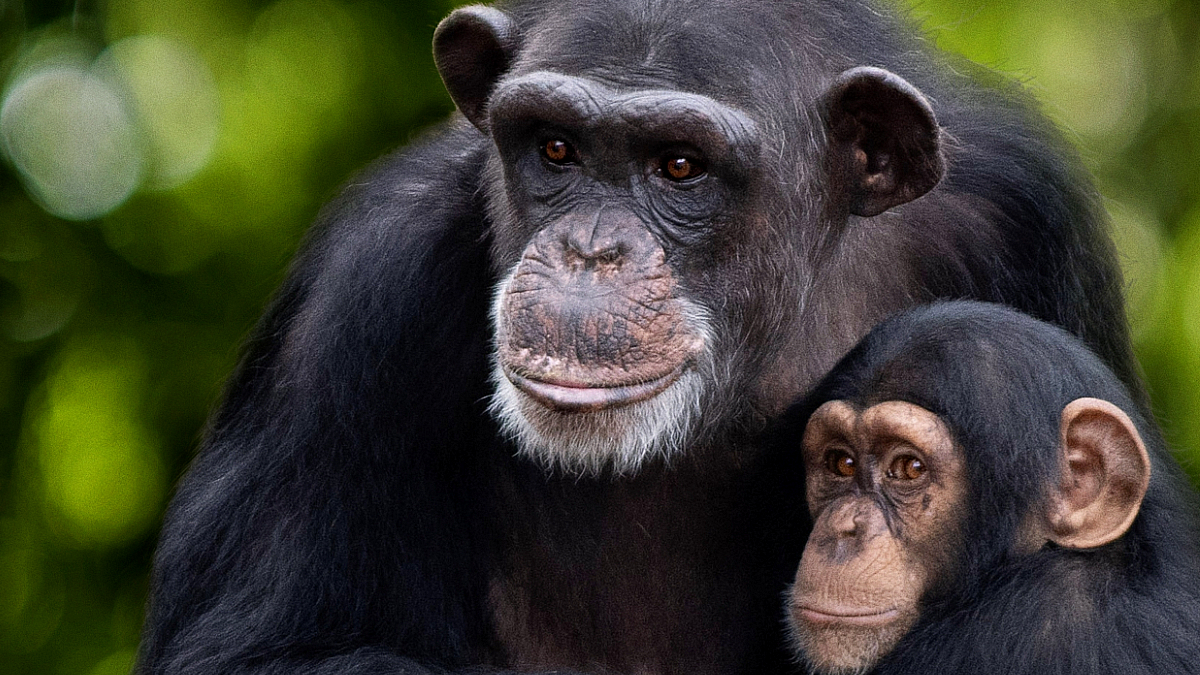 Bottom Line: Meet The Chimps is an entertaining six-part series from National Geographic that streams on Disney+ this coming Friday (October 16).  It is a total A+ winner for families and homeschooled kids in need of a fascinating biology/science lesson.

The new series Meet The Chimps is narrated by actor Jane Lynch as we track several groups of chimp families living at a sanctuary in Louisiana. Their ups and downs that include bad behaviors and shining moments are all caught on camera as these lucky primates now have a second chance at life.

You will meet a dedicated staff of professionals whose work reveals the wide range of wonderful career choices children can investigate as this series shows their interest and dedication, combined with unwavering compassion and commitment to these animals that knows no bounds.

Who knew that Louisiana held a 200 acre primate paradise for over 300 chimps, retired from research facilities. This is the world’s biggest chimp rescue, and their daily antics are both amusing and frighteningly close to human ones.

Colony director Michelle Reininger and Dr. Raven-Jackson Jewett (Dr. J) explain how the chimps arrived to the sanctuary, after the 2015 ban on medical research on their species. These chimps have only known cages and human interaction, never living in the wild.  And as such the approach to dealing with these strong primates is a completely unique one given their backgrounds.

With a bemused narration from Jane Lynch, we observe the behavioral pecking order and cunning tricks the younger and less established chimps have to do to get a decent meal.  Behaviors, tantrums and terrible table manners abound, as one alpha female Sara Soda takes the lion’s share of the food and she looks the part, a portly primate indeed who doesn’t need to scurry about much. Her toadies are Dea and Mackenzie who get seconds ahead of Soda’s pack. Chimp mama and baby Passion and sassy little Carlee are down in Soda’s pecking order, as we see the little ones barely get anything to eat.

Few of us really get to see animal behavior in full play, unfettered by human presence. Even the social structures are fascinating to watch unfold. The best thing for a chimp is another chimp, we learn. Enter newcomer Midge, a lonely male who lost his companion Lulu, and who is now introduced to a new group after a long lonely quarantine.

How Midge bonds and creates a new family is a fascinating chain of events with these primates were family structure and status is everything. In the premiere, Director of Behavior and Research Amy Fultz gives us more insight to their world and a guided tour of the new chimp structure being built and explains how these chimps form their unique groups, not unlike how we form our cliques and groups in high school.

In between welcomed tickles and towel tug-of-wars, Animal Care Specialist Breanne Bain gives us insight to Midge’s quarantine and his ability to blend into the population. It is determined Midge will work well with “The Oddballs” group lead by alpha “kind and politically savvy” Donovan.

Their continuous curiosity just reinforces the feeling that using primates for medical experiments is utterly cruel.

Meet The Chimps is a fascinating reality series that shines a light on how special our primate cousins are, and is a wonderful series for homeschooling parents to work into a fun science and biology lesson for younger elementary school kids.

Episode 101:
Two-year-old Carlee tries to cute her way to more food shares while cheeky Riley pushes his elder females around while mom watches, and the veterinary staff race to move the rest of Riley’s alpha female Slim’s group to a new state-of-the-art corral. Lonely Midge arrives in search of a new family and a forever home, but will he work out in The Oddballs?

Episode 102:
Sara Soda’s turf sees Jimmy Dean and Mason confront a rival group, while Riley’s reign over his group’s home is now bringing the heat from alpha female Slim. Midge’s integration into The Oddballs is iffey-dicey and troublemaker Twyla turns the group against the poor newcomer.

Episode 103:
Nina celebrates a special birthday while bratty son Riley threatens to ruin her party.  Alpha Sparky and his family prepare to move into a larger community, but only if he can heal from a bad injury. In Sara Soda’s family, Carlee’s big sister Arden is a social climber and tries elevate her status in the pecking order, will it work?

Episode 104:
Jimmy Dean and Mason battle for dominance in Sara Soda’s kingdom. Slim’s patience with Riley is tested as they faces a special challenge that produces an unexpected result. Jealous Henry is throwing a monkey wrench into The Oddballs’ moving day, will alpha Donovan let it fly or bring the hammer?

Episode 105:
Jimmy Dean and Mason’s battle is now at Def Con 5 levels, while Carlee is enlisted in solving a mystery. Alpha Spock is confronted by a rebellious lieutenant, Shaq.

Episode 106:
Henry braves the waters and tries to romance his best friend Barbara. A “new obsession” catches the interest of the oldtimers. In Sara Soda’s forest, Carlee is working overtime to be an independent chimp and her father’s identity is discovered.