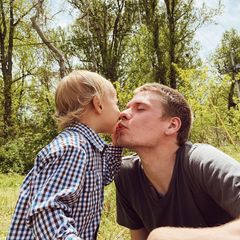 Steven Frend and Olga Koshimbetova, who first appeared on Season 6 of 90 Day Fiance in 2018, have officially split, Steven revealed via social media on Saturday.

Olga, the Russian native went on Instagram on Monday to share her first photo since Steven announced their breakup. In the photo, Olga held the couple’s son, 2-year-old Alex, in her arms while they played together in the grass. Many fans used the post to inquire about the twos relationship status. One person commented, “There are rumors on Instagram that you and Steven broke up? Olga simply responded. “I have not written a post on this topic, but at the moment, as a couple, we are not together.”

Steven speaks out about him and Olga

Steven then posted on Instagram about the two’s relationship saying, “People keep asking if Olga and I are together but the answer is, we went into this super blindly,” the reality star continues via his Instagram Story. “There’s a lot the show left out that’ll have people confused but we have learned a lot about each other over this whole journey but we’re better at being co-parents to our boy. We’re both civil and cause no drama because our son’s mental health is our top priority.”

He didn’t mention the reason for the split but Steven removed all photos of Olga from his social media account. Fans are sad to see the two are cutting ties.

How it all began

Olga and Steven, first met while she was visiting Ocean City in the United States. Olga confessed she was pregnant the two were determined to make their relationship work. They dated long-distance after Olga flew back to Russian and they spent much of her pregnancy apart. Eventually, the family received visas to come to the U.S. and moved to Maryland.

Fans put two and two together

The biggest clue fans saw was from Olga on when she talked about taking a trip to California without Steven. That particular post features Steven and Alex both walking away from the camera. In the lengthy caption explaining her solo trip to San Francisco, Olga said, “Why it was a good idea to go alone without Steven because we finally started to miss each other😂😂 Spending 24/7 with each other can be really tough.” According to an article posted by Monsters and Critics, This news shocked many of the couple’s fans.

Despite a bumpy ride on their season of the TLC series, Steven and Olga seemed to really be doing great once she got to America and the pair got married.