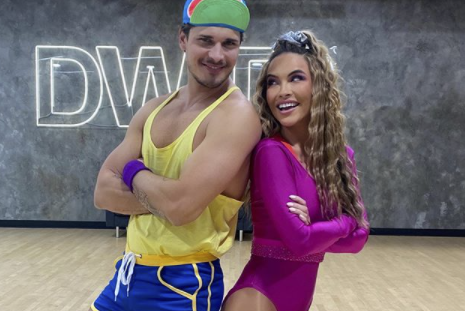 Selling Sunset star and Dancing With The Stars contestant Chrishell Stause is prepping for 80s Night, which airs on Monday night. To get into the mood, she posted a throwback photo on her Instagram page.

Fans quickly commented on how sweet she looked in her sweater and scrunchie. But one fan asked about her past. This is something Chrishell opened up about a little bit on the show.

During a tender behind the scenes moment, Chishell confided in her partner Gleb Savchenko that she was very poor growing up. There were several times she wasn’t sure when she would be able to take a shower and realized that she probably smelled really bad to the other kids in her class.

“Yes, as a family we had times where we had utilities turned off because we couldn’t pay them or when we would be evicted & no where [sic] to go. The amount of times I have gone ‘camping’ and bathed in the river or lake were at times a normal occurrence depending on how much work my dad could find as a mechanic in a small town,” Chrishell said in response to the fan’s question.

But in spite of everything, Chrishell managed to make a name for herself. She has a pretty successful working history on television and now in real estate.

Chrishell And Gleb Continue To Improve Each Week

Even though Chrishell and Gleb scored very poorly in week 1, they consistently improve. Last week, they scored 22 points for their Foxtrot to “Adore You” by Harry Styles. For 80s Night, she and Gleb will do the Cha Cha to “You Got it (The Right Stuff)” by New Kids on the Block.

And apparently, Chrishell is quite the Blockhead. Late last night, she posted a collection of photos featuring band members.

“When I say I am a fan of @nkotb I mean I waited outside the Today show overnight to be able to see their comeback performance kind of fan!” she writes.

Could this be the first week someone scores a 10? Chrishell and Gleb have a few 8s now, so perhaps it will be them. Fans noticed the two have quite the chemistry, which makes them very easy to watch.

Follow TV Shows Ace on social media so you don’t miss another Dancing With The Stars story.