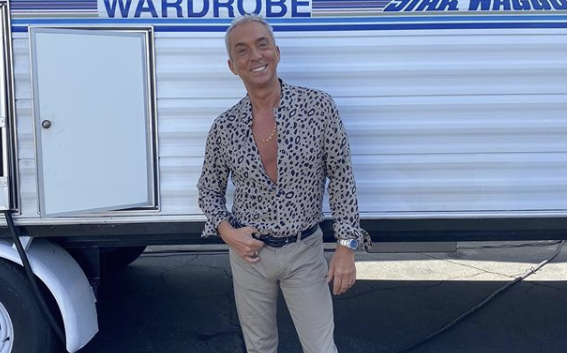 Dancing With The Stars returns Monday night with a special 80s themed episode. Bruno Tonioli was in his prime back in the 80s, so what better way to celebrate the new episode than with a little throwback?

“Channeling ALL of @brunotonioliofficial‘s 80s vibes on this #TBT. 🙌🏼 #DWTS #80sNight” the show’s official Instagram account posted, along with some old photos of everyone’s favorite silver-haired judge.

Channeling ALL of @brunotonioliofficial's 80s vibes on this #TBT. 🙌🏼 #DWTS #80sNight

Bruno has quite a lengthy resume when it comes to dancing. Did you know he was even in an Elton John music video? “I’m Still Standing” came out in 1983. Take a look and see if you can spot young Bruno:

DWTS Contestants Are Excited To Perform This Week

However, Bruno Tonioli isn’t the only one excited about 80s week. As we’ve seen, the competition is really starting to heat up. Each contestant last week scored higher than they had in other weeks. All the judges acknowledged that everyone is working hard and improving with each passing week. So what can we expect to see on Monday night?

For starters, Kaitlyn Bristowe and Artem Chigvintsev currently top the leader board and have a few tricks up their sleeves.

“They’ve seen me do the elegant flowy stuff,” Kaitlyn said to ET. “So I think they just wanna see [something] a little bit more upbeat. Which we’re definitely going to bring next week!”

The top couple will perform the Tango to “I Think We’re Alone Now” by Tiffany. For a full list of songs and routines, be sure to check out this list. Sadly, there aren’t any Elton John songs. Perhaps Bruno will give us a solo performance at some point during the episode?

Who Will Top The Leader Board This Week?

Right now, Nev Schulman and Jenna Johnson are in second place. They’ve taken the entire country by surprise. Did you know the guy from Catfish could dance? This power pair will do the Quickstep to “Take on Me” by a-ha.

Meanwhile, Johnny Weir and Britt Stewart are quickly proving themselves. The couple started out average, but are quickly climbing up the leader board. Their Mulan routine during Disney night really grabbed everyone’s attention, and fans are excited to see what they do next. This week, they will have a Contemporary routine to the powerful song, “Total Eclipse of the Heart” by Bonnie Tyler.

Which routine are you looking forward to most? Do you think Bruno will get a chance to perform? Let us know what you think. Dancing With The Stars comes back on Monday night at 8 PM. Tune into ABC and catch the latest exciting episode for yourself.

Mama June Reveals What She Did To Fix Broken Relationship With Kids
‘Love In The Jungle’ Exclusive Sneak Preview: Meet The Lion
Lindsie Chrisley Warms Fans Hearts With Olive Branch To Todd?
‘The Kardashians’ Hulu Caught Hiding Astroworld Tragedy
‘Yellowstone’ Season 5 Is Biggest Ever: When Is Premiere, Who Is Back?