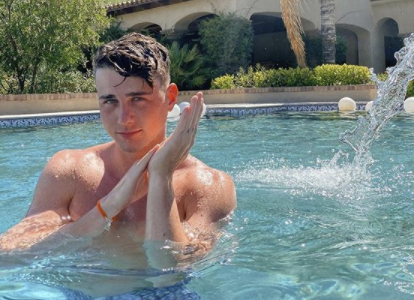 It’s been a while since Too Hot To Handle‘s Harry Jowsey ended his engagement with co-star Francesca Farago. Since then, the two have been spotted all over town with strings of various dates. Most recently, paparazzi spotted Harry alongside Larsa Pippen. You probably remember Larsa as one of Khloe Kardashian’s close friends.

Larsa is still married to NBA star Scottie Pippen, but they are estranged. Rumors swirled this summer that Larsa was having an affair with Tristan Thompson, the father of Khloe’s daughter. However, an inside source claimed those were nothing but rumors.

So if Larsa really is single, she may be filling the void with a young Australian Netflix star. Larsa is 23 years older than Harry, but if it works, it works.

However, the two deny that they’re dating and instead insist they’re just friends having a good time.

So What’s Harry Up To These Days?

Recently, The Hollywood Fix caught up with Harry. He says, for now, he’s celibate and it’s been two weeks since he has been intimate with anyone. When pressed, he also denies that there’s anyone he’s crushing on at the moment. So the rumors about Harry and Larsa could just be rumors after all.

Since Harry and Francesca split up, it really seems like they’re both keeping their options open. Both frequently post seductive photos on Instagram and enjoy wild parties with friends. If the Larsa rumors are true, it could just be a matter of time before she shows up in his sultry Instagram posts.

Did He Really Learn Anything From Too Hot To Handle?

In case you didn’t catch it, Too Hot To Handle is about a bunch of shallow, insecure, yet extremely attractive people. The contestants aren’t allowed to engage in physical contact with one another. If they manage to do that, then they win a cash prize at the end. The whole point of the show was to teach the contestants to find value in themselves and develop meaningful relationships.

Right from the start, Harry connected with fellow contestant, Francesca Farago. During their time on the show, the couple broke the “no contact” rule time and time again. But even so, they finished the show together. They were even still a couple a year after filming.

Harry proposed during the reunion episode and Francesca happily accepted. But somewhere down the road, things fell apart. Their stories vary a little, but both confirm that Harry ended things.

Ultimately, it seems like Harry was unable to give up his tomcatting ways. In addition to Larsa Pippen, Harry has also been seen with Tana Mongeau and Nikita Dragun, among several other celebrity women.

Do you think Harry and Larsa are an item, or is it just more celebrity gossip? Let us know what you think.