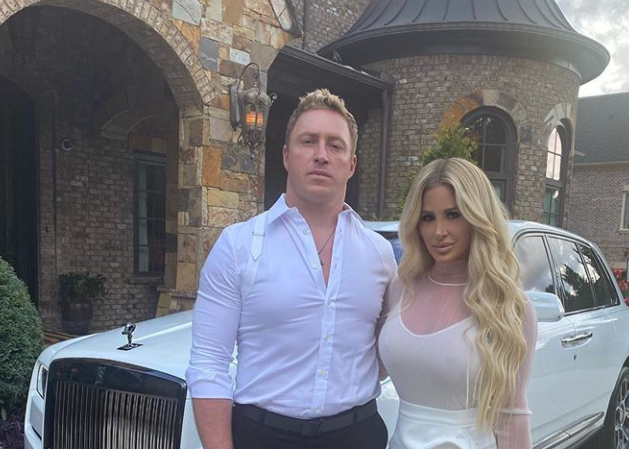 The unthinkable has happened, Kim Zolciak Biermann gave up her mansion. It’s not permanent though, just a temporary change. The reality star gave up her seventeen thousand square foot home to live in an RV.

Along with her husband and six kids, she’s trying the RV life for five weeks. Now, the RV isn’t a small camper. It’s a luxurious tour bus style RV. That doesn’t stop Kim from freaking out about how much smaller it is. Don’t Be Tardy comes back on tonight and it seems the Biermanns are going for a cross country change of scenery.

What Did Kim Zolciak Biermann’s Kids Say About It?

Kane who is Kim Zolciak Biermann’s six-year-old said, “it’s tiny on the inside and big on the outside.” His twin Kaia made sure to let everyone know, “the RV’s stinky.” Kim said she couldn’t help but have anxiety about the RV. She said, “I’m extremely claustrophobic. Like, the thought of being in the RV and the door not opening stresses me out.” She went on to say it would be a nightmare if it broke down while they were driving down the highway.

According to ET, both Kim and her oldest, Brielle revealed camping wasn’t for them. It had been Kim’s idea. She said her husband and her talk all the time about getting an RV after all the kids move out and spending a few nights in each of their driveways. She said, “Brielle’s for two months, Ariana’s. Every kid for two months, so that gives me 12 months for a full year, so that was kind of our dream — or is our dream. But Kroy, definitely the RV-ing, camping, he loves that.” The reality star went on to say she doesn’t cook out or eat meat. Only Kroy loved hotdogs and hamburgers.

Brielle Biermann Said This Was Not Her Dream

Kim Zolciak Biermann’s oldest said a trip across the country sounds terrible to her. She said, “this is some people’s dream, to take a road trip across America on the wide open. Go to these fly-over states and just see what’s going on in the world. Absolutely not. Sounds like hell. Never doing it again.” Kim said next time they would go on a tropical vacation instead. She said, “it was 118 degrees in Arizona, the RV inside was 104. The AC can only do so much. Me being hot, too, it’s not good. Kim hot? Uh uh.”

In an interview with E Online, Brielle and Ariana talked about the struggle and they were grateful they had each other. Ariana agreed, Brielle had the hardest time on the trip. She said, “don’t get me wrong, it was definitely a struggle for both of us.” She said Brielle being a germaphobe made it hard for her and she couldn’t get her hair and makeup done.

Brielle said it was, “the longest 40 days, 40 nights of her life.” She also said, she got bedbugs during the trip. Brielle said, “It was not the vibe. That was horrible, especially since I’m such a germaphobe. It’s like of course I’m the one to get the bed bugs.” Don’t Be Tardy premieres tonight with two episodes on Bravo.