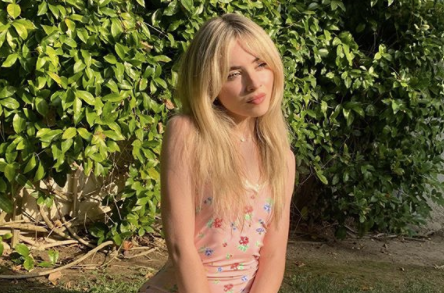 Live-action musicals bring so much joy to audiences everywhere. From Newsies to Hamilton, there’s something special about seeing your favorite shows on your TV screen at home. Now, Netflix is working on a live-action musical adaptation of Alice in Wonderland. Girl Meets World star Sabrina Carpenter is set to produce and star in the show. Joining her is the creative team behind the hit dance movie, Work It.

Sabrina confirmed the news on Instagram by sharing a screenshot of The Hollywood Reporter article.

“THIS IS PERFECT” her Work It co-star Jordan Fisher commented. Plenty of other celebrities and fans offered Sabrina some well wishes.

too excited for this… @netflix at last productions 🥺🌹 we’re going to wonderland!

There’s still a lot we still don’t know about the project, but it’s confirmed it will be a modern retelling. But we already know that Sabrina Carpenter is insanely talented, so it’s bound to be exciting. If you haven’t seen Work It yet, make sure to tune in and see Sabrina at her best.

We’ll let you know as soon as we know any more about this project. In the meantime, get excited!

She may be young, but Sabrina is certainly no stranger to the stage. She had a handful of small roles, but got her big break in 2014. Her role on Disney Channel’s Girl Meets World introduced her to the world and gave her the recognition she deserved. Girl Meets World was a sequel to the 90s hit, Boy Meets World, and ran from 2014-2017.

She also developed a successful music career over the years. Before the pandemic hit, Sabrina starred as Cady Herron in the Broadway production of Mean Girls. Although her run was cut short after the theaters closed down, she plans to return to the role once it’s safe to reopen again.

If you have the chance, look up her work sometime. Sabrina is incredibly talented and will surely make her adaptation of Alice in Wonderland a smashing hit.

While You Wait, There Are Plenty Of Other New Shows Coming To Netflix

It could be quite some time until Sabrina’s project hits the streaming platform. But you don’t have to wait forever to check out some other excellent shows.

The latest season of award-winning Canadian comedy Schitt’s Creek arrived on Netflix a few days earlier than expected. This year the show received 15 Emmy nominations and won 9 of them. That’s pretty impressive! Give it a try if you haven’t already.

Or, you can browse through this list and see what will come to Netflix in October.

Are you excited about the new Alice in Wonderland starring Sabrina Carpenter? Let us know how you feel. In the meantime, follow TV Shows Ace on social media. We’re here to keep you filled in every step of the way.