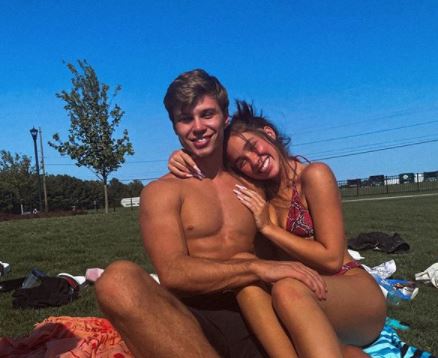 Ariana Biermann may just barely be an adult, but the star of Don’t Be Tardy has found love. E! Online shared about Ariana’s boyfriend and how serious these two are together. She is constantly posting him on her social media.

Ariana Biermann is dating Aaron Scott who just happens to be a model. These two are very serious already. Fans have watched her date a few people, but this one seems like it will last.

When talking about Aaron, Ariana told E! details saying, “We are doing amazing. He is honestly one of the most incredible people that I’ve ever met. And just like my best friend.”

She went on to say, “We are doing amazing and he gets along very well with my family, which makes me really happy and he is a very driven, motivated person, which helps me motivate myself as well. We just better each other in every aspect and it’s just honestly such an amazing experience and I’m so happy right now with my life, and just everything it’s going amazing.”

They have been together several months and things are serious so far. You never know she could get married before her sister. She compared it to when she dated Collin and said that things with Aaron are the most serious since then. She is a bit older now. Aaron and Ariana seem to be getting along great from her posts and hopefully, he will show up this season on the show.

The new season of Don’t Be Tardy

It is finally time for a new season of Don’t Be Tardy. Things are going to be a bit different this time around, though. Kim Zolciak Biermann gave up her house to go in an RV for five weeks with her crazy family. They will be traveling and you know this is going to be wild.

There was talk in the past about Kim doing a similar show with NeNe Leakes, but it never happened. Maybe that is why they chose to do this with her family instead. It will make for an interesting season of Don’t Be Tardy.

It sounds like Brielle Biermann had a bit of trouble dealing with this trip, but luckily she had her sister. That had to make it a bit easier on them.

Don’t miss new episodes of Don’t Be Tardy when they air on Tuesday nights on Bravo.

Kanye West ‘Sl*t-Shamed’ Kim Kardashian With Explosive Claim?
Did Kim Kardashian Come Out On Top In Her Divorce?
Crunchyroll Set For An Epic 2023 With New Anime Acquisitions
‘Today Show’ Fans Want Temp Anchor To Stick Around
Lifetime’s ‘Record Breaking Christmas’: All The Details