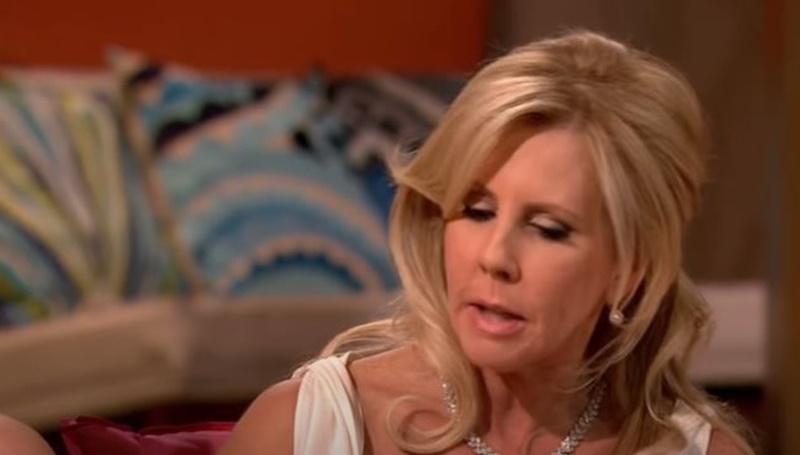 RHOC fans met Braunwyn Windham-Burke and Sean Burke in Season 14 of the Bravo show. This year’s their 20th anniversary and they plan a renewal ceremony. In fact, fans might see it in Season 15. However, rumors of divorce run around the Internet. And, recent Instagram posts suggest they’re likely true. Vicki Gunvalson dropped a comment about it and Real Housewives of Orange County fans slammed her for it.

We reported that the rumors took on a new life after Braunwyn posted on her Instagram about “co-parenting.” And, she asked for respect as the family go through a rough patch. Plus, their daughter posted a photo with the caption “F**** You Mom.” According to Us Weekly, Braunwyn posted about a Zoom workshop with a divorce specialist. Plus, fans already know that the couple split before.

So, the RHOC couple came with some issues on Bravo. Recall, that during their split, Sean dated other women. And, it all happened after Braunwyn apparently cheated on her man. So a rocky marriage road could hardly get blamed on the Real Housewives of Orange County show. But, that’s exactly what Vicki Gunvalson implied in her comment on the drama. So, fans slammed her on Instagram.

The @bravohousewives Instagram account posted about the divorce rumors. The caption mentioned the many “rumors…swirling…about Braunwyn Windham-Burke’s marriage.”  Well, Vicki commented, “Hmm… looks like being on RHOC only took 1 year before their marriage had “issues.” Then, she added, “The HW curse.” Naturally, fans grew very angry about that. And, one fan slammed her, saying, “oh please. You started the curse.”

Another disgusted fan wrote, “Really? You love this don’t you?! As I recall you got divorced and were involved in a cancer scam! Disgusting.” Then, someone wrote, “you are the LAST person from OC that can talk about marriages😌 Brooks was by the far worst man OF ALL THE FRANCHISES & he was yours. Be humble!” And, another person asked the RHOC alum, “if the shows so cursed why did you wait so long to leave it?”

This comment also slammed the OG of the OC: “Hmm looks like someone doesn’t know how to move the f–k on. Please, GET A LIFE! 🙃🤗🤮🤢.” Things became rather hectic for a bit. This comment followed: “it’s disgusting how you can read the sick pleasure you get from other people’s misery … nothing new though.” And, “What a spiteful person. Just because it happened to you, don’t wish it upon thy neighbor.”

Wow, it looks like RHOC fans hate Vicki’s comment about Braunwyn and Sean’s possible divorce. What do you think about it? Sound off your thoughts in the comments below.