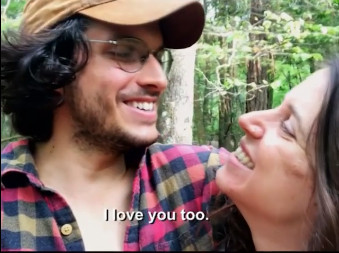 This week’s Married at First Sight is the sweetest, ooey-gooey-est since the five Season 11 couples from New Orleans met.  Every relationship gave viewers some reason to smile, some more than others.  Still, there was hope that the arranged marriage matches just might make it through beyond survival in the September 30 episode, “One Month Down and a Quarantine to Go.” The couples marked their one month anniversaries in big and small ways.  Each was determined to stay committed– not knowing that quarantines restrictions and decisions over destiny and destinations were at the door.

Of all the Married at First Sight pairs this season, Woody and Amani Randall are already the most married.  In 98 hours, they took their honeymoon passion to the heights of intimacy. Last week, the two proved they were already up to talking positions under the sheets.  They grew even closer over emotional revelations.

Amani decided that a discussion of finances over breakfast was a good idea.  She told her husband to “fix your face” when he grimaced over the idea of getting a dog. When she got down to the dollars and cents, it was clear that Woody’s taste in weekly dates and shopping were going to make more than a dent in their combined funds.

“I’ll have to figure out how to support him,” she reflected out loud.  Woody’s idea is that he can’t die with money, so he may as well spend it, whereas Amani keeps her eye on the bottom-line.  Financial conflicts are never over the dollars, but instead, relate to the priorities behind them, as Olivia and Brett are discovering on Married at First Sight as well.

There’s no question that Amani will end up with her precious pooch, as Newsweek also covered.  For now, though, Woody opts to spoil his bride with some sparkle for their one-month anniversary.  He never does anything half-way, so of course, diamond earrings are his surprise.

Amani is delighted and even better than the shimmery studs is a coupon book of intimate exercises, cozy dates, and dinners.  She immediately starts to strategize on how to use the most coupons together.  She chooses a foot massage first, and hubby is more than happy to oblige on their Married at First Sight milestone.

Miles and Karen lend support to the canine cause, telling Woody and Amani that they are considering becoming foster parents to a dog.  The deck is stacked against Woody on this one.

Bennett and Amelia proclaim their love on ‘Married at First Sight’

If Married at First Sight ever chooses to create a smash-hit spinoff, Bennett Kirschner and Amelia Fatsi already are fan-favorite superstars.  The kismet couple shared their deepest intimate admirations for each other last week.  This week, “the romantic thespian” declared that he was ready to tell his bride that he loved her if he could muster his nerves on a hike.

Before the outdoor adventure, Bennett shared a meal with his sister, Molly, and the “curmudgeon” and “miserly” stuffed animal duck, Yoot.  Molly did a Tarot card reading with her brother.  She revealed that he was “too happy” in his Married at First Sight relationship, and that jubilant feeling might be clouding his judgment.  On the other hand, though, he affirmed that Amelia “might very well be the person” meant for him.  Molly concluded that the couple’s love was destined “to last through many lifetimes.

A moment for eternity

The nature hike at Desoto Springs is etched permanently in the hearts of this pair.  Their video actually marked the spot where Bennett said “I love you.” As if her beaming smile didn’t reciprocate the emotion, Amelia affirmed the same devotion to her Married at First Sight fella.

Coming back down to earthly concerns, Bennett stood at the door with his first anniversary gift, a blender.  He allowed the door to open and close a couple of times while his wife gushed with delight.  She relished all the settings on the appliance.  She practiced her musical skill on the jaw harp that Bennett gave her, too.  Amelia’s gift to her husband is a song about her “mystery man.”  She performed like a reinvented Joni Mitchell in pajamas in this loving Married at First Sight installment.

Previews of next week’s Married at First Sight reveal the suspense over Amelia’s residency.  She’ll be heading to Richmond, Virginia.  Their bond of love may endure for all time, but will Bennett follow his bride so far away? This will be a crisis-evoking question.

The “anti-trust” walls are still high and wide around Karen’s heart. The bride and groom do resemble a more real and relaxed couple. They are taking Married at First Sight expert, Dr. Viviana Coles’ advice to take intimacy out of the equation for now. There were more smiles, kisses, closeness, and cuddles between the two but Karen chided Miles’ handwriting on her anniversary card, rather than focusing on the sentiment.  This match has a lot in common if the walls ever come down.

Their game of “Two Truths and a Lie” and their date with Woody and Amani, were their best moments of the episode.  Karen got it right when she said that she was “hard to read” in her husband’s estimation. She was also on the money when she said “he treats me well.” The question is, how long can any relationship survive without reciprocal addressing of needs. Quarantine may answer the question.

Christina blasts Henry before having a ‘Married at First Sight’ breakthrough

When their anniversary basket from the experts arrived, Henry and Christina had some fun realizing how many times they kissed on their wedding day.  Not everything has been so distant or difficult between this Married at First Sight match.  Patience and politeness are not strong suits for Christina, and she does have a way of doublespeak, saying something caring along with something derogatory.

Henry had a long talk with his female friend, Kristin, and for a while, it sounded like he was defending all of Christina’s negatives. Kristin urged him to just accept the good and not so good elements of his character.  She wasn’t so positive about whether the differences between him and Christina could ever “complement each other.”

In contrast, Christina and her friend, Chris, lambasted Henry for being “the good guy,” imagining the straight arrow he had been all his life.  Finally, Chris conceded that Henry was the nice guy that Christina had hoped for in her Married at First Sight journey.  He suggested that she “push his buttons” to prompt some action.

Christina told Henry that she had “kind of a breakthrough.” She insisted that she was going to stop comparing her groom to every other guy in her past.  If only she had made this decision two weeks ago, this match might be a Married at First Sight success story.  Quarantine isn’t going to be easy for Christina and Henry.

At one month of marriage, Olivia and Brett have had three sessions of intervention by the Married at First Sight experts.  They begin this episode by calling Pastor Cal Roberson to help them sort out Brett’s different behavior “on camera” than home alone and his accusation that Olivia was “insecure” over their commitment.

Many Married at First Sight fans suspect that much more is going on between takes than whatever goes on camera.  Brett seems very committed to fulfilling his commitment to the show, but never seems committed to any activity that Olivia enjoys. There are huge trust issues here on both sides, and both partners contend that the other’s approach is “mean.”

It would be such a pleasure to see genuine smiles on their faces rather than a single condolence cuddle.  Brett says the right words, but he’s been a dater for so long that he may never understand devotion.  These two seem headed for the same mutual decision on decision day.

The ‘Survivor’ Twists That Have Fans Furious
Artem Chigvintsev Temporarily Pulls Out Of ‘DWTS’ Tour
Garcelle Beauvais Says New Girl Hit A Bump, Can’t Wait To See Editing
UPtv’s Abrupt Decision To End ‘Bringing Up Bates’ Deemed ‘Unusual‘
‘The Amazing Race’ Is Too Afraid To Go To These Countries