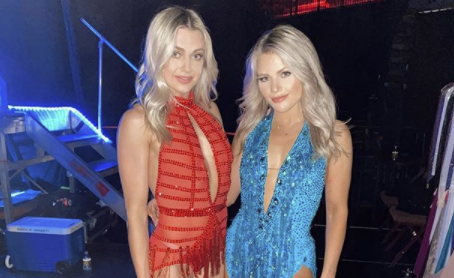 If you tuned in to Dancing With The Stars this season, you probably noticed a few familiar faces are missing. Pro dancers Witney Carson and Lindsay Arnold are sitting out this year. Both dancers are pregnant and taking it easy for the next few months.

The women have been best friends since they were little girls. They competed on So You Think You Can Dance together, and shortly after became pros on Dancing With The Stars. They were in each other’s wedding parties and now are experiencing their first pregnancies together. Lindsay is expecting a baby girl in November, while Witney is expecting a son in January.

Many fans tease that their children could grow up and get married someday.

“Witney and Lindsay’s kids are a prearranged marriage waiting to happen 😂,” wrote one fan on a photo Witney posted from Lindsay’s baby shower.

Witney Carson and Lindsay Arnold are also close friends with pro dancer Jenna Johnson, who is competing in Season 29 this year. However, Jenna recently confirmed she also has baby fever. By this time next year, it may be her turn to sit out.

Witney once said in an Us Weekly article that she believed Jenna or Emma Slater would be the next pro to have children.

In any case, it’s definitely been a big year for Dancing With The Stars babies. Artem Chigvintsev also became a father over the summer.

So What’s It Like Being A Spectator This Season?

Even though Witney and Lindsay aren’t competing this year, they’re definitely still watching. Before the season kicked off, Witney’s husband said he was excited to have someone to watch with this year.

Lindsay posted a promo from a previous season and wished her friends well.

“This @dancingabc premiere night looks a little different this time around 😆😆😂😂 currently sitting on my couch in sweats yelling at the tv cheering on my friends!!!!! Definitely missing my dancing family but so excited to watch them all season long ❤️ who are you guys loving so far?! #dwts” she wrote.

This @dancingabc premiere night looks a little different this time around 😆😆😂😂 currently sitting on my couch in sweats yelling at the tv cheering on my friends!!!!! Definitely missing my dancing family but so excited to watch them all season long ❤️ who are you guys loving so far?! #dwts

Witney echoed her friend’s sentiments and posted another baby bump photo. She says that this is the first time in eight years she hasn’t been part of Dancing With The Stars and she misses dancing so much. Fans remain hopeful both Witney and Lindsay will return to the stage in future seasons.

Watching the Dancing With The Stars premiere at home this year with baby boy. First time in 8 years I haven’t been apart of the show 😭 It is bittersweet and I’m definitely missing dancing for you all, but I am so grateful to be growing my little human miracle. ✨💙🥰 Wishing my friends luck tonight, and I can’t wait to cheer everyone on! @dancingabc #23weekspregnant #dwts #dwtspremiere

Don’t forget that this Monday is Disney Night on Dancing With The Stars! Who are you cheering for this season? Make sure to tune in and let us know what you think. We’re always excited to hear from you.