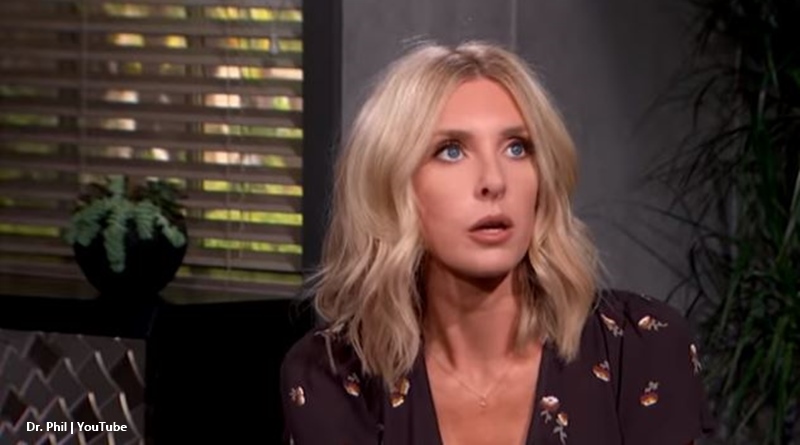 Lindsie Chrisley sparked the conversation about her trying for a second baby on her Coffee Convo’s Podcast. That came in June. She already raises her son Jackson but suffered a miscarriage. However, after raising interest in a second child, she now says that she won’t share news about that.

Lindsie Chrisley on a second baby

We reported that Lindsie talked about a second child on Coffee Convos. She talked about how she and her husband Will Campbell hope for a brother or sister for Jackson. Recall, they tried for another baby before, but she suffered a miscarriage. So delighted fans obviously ask her more about it. She thinks maybe she’ll produce a girl this time, US Weekly noted. Also, she talked about the “two mediums” who said her “next child is a girl.”

Lindsie Chrisley told her fans on the podcast that they try for another baby. And, she plans on keeping “everybody updated. If it’s a girl.” So, they try for baby, and she promised about updating. But now, she says she plans on keeping it all private, so don’t hold your breath for news soon. It came in a post in answer to a fan in her Instagram Stories on Tuesday. Actually, it looks like she takes back that promise about updates.

In her Instagram Stories, Lindsie shared a photo of a baby. A fan asked, “When Baby #2 coming?” Well, Lindsie then wrote on the card, “This timeline is something I’ve decided to keep private.” She mentioned that even her “family” asks this question. But, she feels that “sharing” about it is the one thing that she can keep “control” over. Then, she wrote, “God’s timing.” Actually, it seems a bit odd that she started the narrative, promised updates, and now says she intends keeping it all private.

Well, pregnancy really is a very personal thing, so she shouldn’t feel obliged to share every single detail on her journey. However, Lindsie Chrisley fans might feel a bit disappointed that she keeps it all to herself. After all,  nobody forced her to talk about a second baby in the first place. But, when Lindsie talks about her own family questioning her about a second baby she probably didn’t include her dad Todd in that. 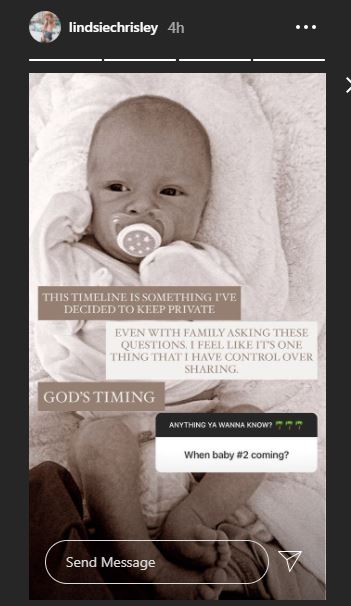 Todd won’t see much of his grandchild when it happens

If and when Lindsie falls pregnant with a second baby, well it’s unlikely that Todd sees much if it. Their estrangement looks far from over. Popculture reported that recently, Lindsie Chrisley vowed that she won’t ever make amends with her father.

What do you think about Lindsie promising baby updates but now refusing to answer and keeping the timeline private? Sound off in the comments below.

‘The Little Couple’ Will & Zoey Klein All Grown Up, See Big Changes
Christine Brown Has Magical Time With Someone Special
Lawson & Tiffany Bates Get Roasted Over Big Price Tag On Recent Trip
‘Below Deck Med’ Hannah Ferrier Returns To High Seas For New Gig?
Ben Affleck’s 10yr Old Drives Lamborghini Into BMW With JLo In Back?