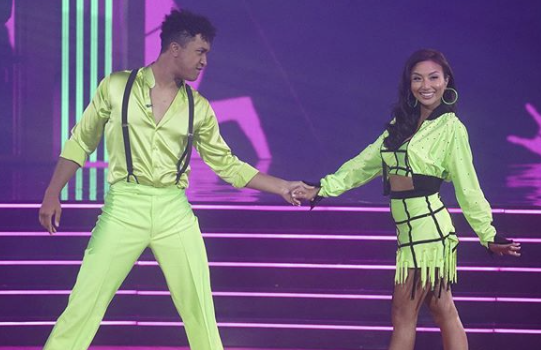 Did you manage to catch the Dancing With The Stars Season 29 premiere? If not, you can catch the recap here. You can also check out the show’s Instagram page for some exciting stills from the night.

Len Goodman was unable to join the judges’ table this year due to the Coronavirus pandemic. Former pro Derek Hough takes his place this season. Len did, however, manage to make a virtual appearance.

To keep everyone in the competition safe, live studio audience members were not in attendance this year. Instead, the DWTS crew added a clapping track instead. This was a little odd for viewers, so it must have been very strange for competitors.

Who Had The Best Dancing With The Stars Performance?

There is actually a tie for first place right now.

Disney Channel star Skai Jackson may be the youngest competitor this year, but she’s also the fiercest. She and reigning champ Alan Bersten scored 21 points. The height difference was certainly noticeable, but they pulled it off well on the floor.

@skaijackson has arrived!!! 👑 Comment 💜 to congratulate #TeamReachForTheSkai on earning the highest score of the night so far! #DWTS

Up next, Justina Machado and Sasha Farber executed a Cha Cha to “Respect” by Aretha Franklin and managed to score 21 points, tying with Skai and Alan for first place. Judges and fans alike were really pleased with their performance.

So Who Was The Worst?

Basketball players typically don’t do well on Dancing With The Stars, and Charles Oakley was no exception. He and Emma Slater only scored 12 points and the judges felt that Charles was awkward and clunky.

Chirshell Stause and Carole Baskin told fans they didn’t have any prior dance experience. Unfortunately, that reflected on their scores.

Chrishell and Gleb Savchenko are paired this season and were the second to compete. The judges quickly took notice of her lack of experience. She and Gleb did not have the lowest score of the night, but they still only managed to score 13 points.

DWTS saved Carole Baskin for last. She and Pasha Pashkov teamed up to perform the Paso Doble to “Eye of The Tiger,” which fits Carole well. However, it was definitely not Carole’s finest hour. She seemed very uncomfortable and awkward the whole time. As a result, she earned the lowest score of the night at 11 points.

To quote @derekhough, “Carole Baskin – Did the Paso, smashed it!” Awesome closing performance to our Premiere by #TeamAreYouKittenMe. 🔥 #DWTS

Did anyone else notice so many couples received 18 points tonight?

Backstreet Boy AJ McLean and his partner Cheryl Burke were the first to compete tonight. Although fans expected AJ to do well, his Jive routine was just average. In the end, the judges gave them a score of 18.

Actress Anne Heche and Keo Motsepe were next to grace the stage. While some fans felt that Anne looked a little stiff, the judges were nevertheless impressed with their performance and gave them a score of 18.

Jaws dropped when Jeannie Mai and Brandon Armstrong stepped out in their lime green costumes, but they definitely delivered. The pair managed to impress the judges and also received 18 points.

Olympic figure skater Johnny Weir was a natural on the dance floor. His partner, Britt Stewart, is a new pro this year. Their routine to “Buttons” by The Pussycat Dolls was definitely spicy. They impressed the DWTS judges and also came away with a score of 18.

Jesse Metcalfe and partner Sharna Burgess did a fun Quickstep routine to “Part-Time Lover” by Stevie Wonder. Like several other couples tonight, they too scored 18 points.

And As For Everyone Else…

Football legend Vernon Davis teamed up with Peta Murgatroyd to deliver a smooth Foxtrot routine to “All of Me” by John Legend. Dancing doesn’t always come easily to athletes, but Vernon really seemed to pick up the steps. They earned 17 points.

To fans delight, The Bachelorette’s Kaitlyn Bristowe and pro Artem Chigvintsev are competing together this year. They were supposed to compete together in a previous DWTS season, but plans fell through. It only seems right they are paired together now. Artem became a father over the summer and said he wants to dedicate this season to his son. The pair scored 20 points from the judges.

Nev Schulman of Catfish fame and Jenna Johnson scored 20 in a Foxtrot to “The Way You Look Tonight” by Frank Sinatra.

Cheer‘s Monica Aldama and Val Chmerkovskiy scored 19 points with their Foxtrot. Their score was better than most of the contestants, but the judges told Monica she was very stiff at times.

Up next on the Dancing With The Stars stage was Nelly and partner Daniella Karagach. Fans loved the routine to Nelly’s own song, “Ride Wit Me,” but the judges had mixed reactions. They received 16 points.

#TeamDaNelly brought the swag! Comment 💵 if you thought their Salsa was so money. #DWTS

Which routines were your favorite? Be sure to let us know. Don’t forget to tune in next week for the next exciting installment of Dancing With The Stars.