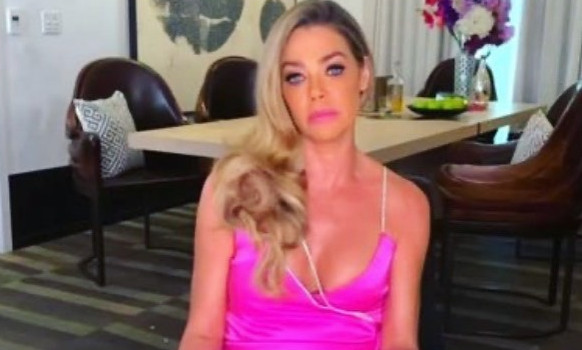 After a rough Season 10, actress Denise Richards is leaving The Real Housewives of Beverly Hills. Her rep confirmed the news on September 9, hours before Part 2 of the reunion airs. She was the target for much of the season, with allegations of an affair with Brandi Glanville.

It has been Housewives fan gossip for months – will Denise Richards return for another season or not? While she has remained mum on the topic, Bravo host Andy Cohen said he hopes she will. Sadly, it appears that Andy’s hopes are dashed.

A spokesperson for the Wild Things actress exclusively confirmed the exit to Variety. The announcement came in late afternoon, hours before the September 9th episode was set to air. The episode will feature Part 2 of the virtual reunion. Part 1 saw Denise verbally tussle with former friend Lisa Rinna.

Toward the end of the season, Lisa and Denise’s friendship suffered because Lisa started believing Brandi’s accusations. Former RHOBH star Brandi Glanville alleges that she had an affair with Denise Richards in 2018.

Denise denies the allegations, but most of her co-stars don’t believe her. This has caused major tension throughout much of the season.

Which only gave the other women more determination to get “closure.” Denise also appears to walk off-camera during the virtual reunion, as the teaser shows. Many fans of RHOBH and Denise have dubbed the behavior of the other women as “Mean Girl” behavior. And it appears Denise is fed up with it, too.

The reaction on social media was swift. Many fans are upset, but understanding over Denise’s exit. They don’t blame her for walking away one bit. She recently joked that she would rather appear on RHOP, so perhaps Bravoholics haven’t seen the last of Denise.

One fan was OUTRAGED that Denise is the first to leave Season 10 instead of Teddi Mellencamp.

HOW IS DENISE RICHARDS LEAVING #RHOBH BEFORE TEDDI. 2020 IS CRUEL BEYOND BELIEF

Many fans see Teddi as the ringleader in the vendetta against Denise. In fact, she’s facing rumors that she’s been fired from the show. She denies the rumors, but fans are hoping the rumors are true.

What about Garcelle Beauvais?

Garcelle Beauvais has been the one true friend to Denise this season. The actresses have been friends for over 20 years. While Garcelle started to doubt Denise during the finale, she has been her sole defender during the reunion.

Garcelle recently announced that she is joining The Real as co-host. And now fans bet that Garcelle is leaving RHOBH, too. She did, after all, say that if Denise leaves, so will she.

While Denise herself hasn’t spoken out about her exit yet, it seems to be a done deal.