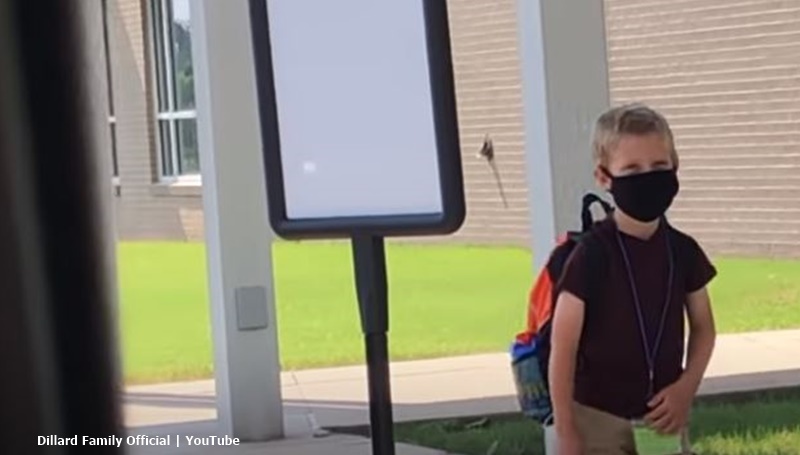 Duggar fans heard that Derick and Jill Dillard chose to send Israel to public school. While not earthshaking news for most people, it certainly stands out in the Duggar family. We reported that ahead of starting kindergarten, Jill took Israel shopping for his school supplies. And, he seemed very excited. Now, they shared more updates on the Dillard Family Blog.

Duggar grandchild so excited and well-prepared for school

In a series of posts, Derick and Jill Dillard shared updates on Israel’s first day at school. One update came in the family blog. Another came on Instagram, and they popped up a video on YouTube. Certainly, it seems that Israel looked very excited, and obviously, his parents prepared him very well.

On the blog, the Dillards noted that Samuel starts Pre-K at home with his mom. And, they announced with some joy that little brother graduated to big-boy underwear now. But, the focus remained on Israel. An interesting photo of Derick at the same age showed that his son looks the spitting image of his dad when he started school. Meanwhile, the YouTube video went into a lot more detail about Jim Bob and Michelle Duggar’s grandson.

The night before school, the whole family gathered in the boys’ bedroom and watched a video by Israel’s new teacher. Israel looked super-excited about it. In the video, the teacher said that she feels a “bit nervous, excited, and scared, just like you are.” But then, she said she can’t wait to see their “smiling faces.” Israel gave a huge grin at that.

Next, Derick showed the boys his own kindergarten class. Jill Duggar and Derick obviously put in a lot of time preparing their son. Actually, Samuel seemed very keen on the idea as well. It might be a bit easier for him by the time he goes to “real school.”  The next morning, they shared photos of Israel, and one of those also got shown on Instagram. Next, the video showed the whole family driving to school. Israel seemed rather proud that he wore his mask.

Samuel looked a bit sad when Israel went into the school

After they dropped off Israel, Samuel looked a bit sad. But, he bravely told his parents he felt excited about learning his own school at home. Later, they all went back to collect Israel who walked out of school looking like a veteran. He told Jill Duggar that he had so much fun. But, he missed his nap as they don’t do that at kindergarten!

After school, Jill and the kids chilled and talked about their day at school. It certainly seemed a successful day for the Dillards. And, Israel looks quite confident about going back for more school.