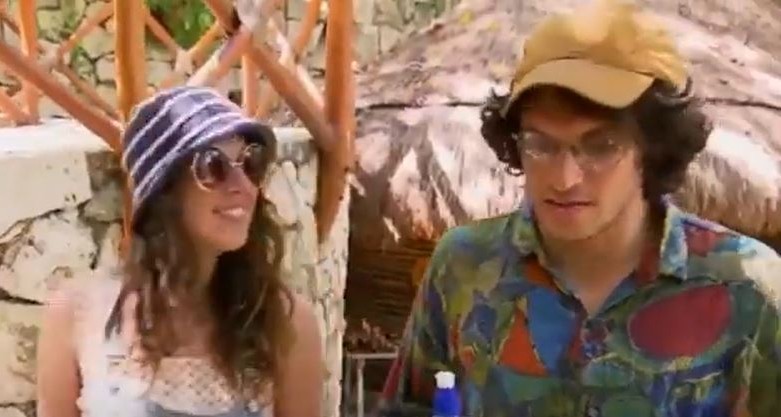 The title for this week’s Married at First Sight certainly tells the truth for the five New Orleans couples committed to the arranged marriage reality show.  The business of the August 26 episode, “The Honeymoon Is Over” is all about adjusting to married life together.

Expert Pastor Cal Roberson pays a visit to each of the matches to do more than chat about honeymoon memories.  The Married at First Sight counselor deliberately pushes the pairs to probe the difficult but inevitable problems they face in staying together forever.  As always, the pastor does his homework and has the perfect insight into the hurdles that are already looming.

From the instant they were introduced to each other at the altar, Woody and Amani had that rare gift of attraction.  Their honeymoon drew them closer in all the right ways.  Sharing moments of caring attentiveness and conversation let them go to the depths of passion, but not into every topic.

Amani declared that Woody’s “hat wall” wasn’t her idea of home décor.  He was very cooperative as her “sales associate” as she selected the clothes she would take to their neutral apartment.   The subject of his wife going to short or no hair, however, got a deal breaking-response from the groom and a speedy push back from Amani. Woody insisted that if Amani ever decided to cut her hair short or be bald, he would no longer be attracted to his Married at First Sight mate.

Pastor Cal rightly declared that in the scope of marital conflict, “This ain’t nothin’!” What matters is being able to discuss tough issues and get to the root of the conflict. In Woody’s case, the real reason for his taking offense to a hairstyle change traced back to a former girlfriend getting an abortion without involving him. He affirmed that he would love Amani if she ever got alopecia, because “that’s a disease.” The couple soon turned their Married at First Sight dispute into a discussion about always informing each other on any major change. Amani made it clear that the choice of how to wear her hair would be hers, but she would tell Woody first.

The only true scolding that Pastor Cal issued was about not always using protection during intimacy. The seasoned Married at First Sight expert boiled things down to third-grade level.  “You know what makes babies, right?” Someday, these two might very well join the parent club of MAFS alums. That should wait until long after Decision Day.

As always, it was a delight to see Bennett and Amelia explore the joys of their new home for seven weeks. The lovebirds got the biggest kick out of the echo in their bedroom closet. They couldn’t wait to go in and harmonize! The new apartment is a step-up in accommodation for Bennett. His tiny house speaks a lot to his creativity and industry but lacks the essentials of a bathroom or kitchen.

Being a doctor, Amelia suggested one bathroom sink to be dedicated to “toilet stuff” and the other to regular washing. Bennett immediately said that two bathrooms could accommodate the need separately.

TV Shows Ace has already reported that hygiene needs to be higher on Bennett’s list.  He got a social media blasting for his dirty feet during Pastor Cal’s visit.  Naturally, the topic that interested the  Married at First Sight expert most was whether they had broached the impending move for Amelia to complete her medical residency. It’s clear that they both sense a blow from this inevitable reality because both the bride and groom took the attitude of “We’ll cross that bridge when we come to it.”

Amelia thinks her husband and his feet smell just fine. “Just look at him,” she gushes to Pastor Cal.  Bennett calls his wife “beautiful” and both partners affirm their attraction for each other.  After all, they’ve already decided they could spend a week in a cardboard box with each other.  Their new apartment is much nicer.

That was a great episode, right Amelia?! 😁 Tell us your thoughts 👇 #MarriedAtFirstSight pic.twitter.com/NoVivSGv4Q

Will Bennett be able to handle full-time father duties?

Pastor Cal warned that the illusion of always being on the same page doesn’t last, no matter how wonderful the new married seems.  Bennett is coming around to the idea of having natural children, and Amelia definitely sees adoption in their future. Her bohemian lifestyle has made her much more independent and mobile than her husband ever had to be. His bonds to family and friends could be so strong that they prohibit this pursuit of a lifelong love for the Married at First Sight fan-favorites. Bennett did say he could see himself writing on a beach, while taking care of the kids.

Amelia is going to crave that support. Like her mother, she is fine with being the financial sustainer of the family. Bennett admits he hasn’t had “a stable relationship with money” and she wants a husband to “raise my babies” as she told Married at First Sight. Life doesn’t come free and love doesn’t come without sacrifices.

In a precious moment at the “mansion” Amelia shares with several roommates, Bennett is surprised that his wife was a homecoming queen in high school. After a peek through her yearbook, he confesses that he never considered such an event as being “within my realm of possibilities.” He continued, “I hope I don’t mess this up.” Let’s hope those words become a self-fulfilling prophecy for this adorable Married at First Sight match.

The Married at First Sight segment with Brett and Olivia began with the groom describing the tensions between the two in cohabiting.  TV Fanatic covered the conflict on August 27. Olivia greeted Pastor Cal as “the man with the plan.” She almost fell into his arms. Finances can be a problem in a marriage, but the topic sparks a fierce and personal attack between these partners.

Hurt feelings and earning disparity blended for a volatile cocktail during the visit with the counselor. Olivia started to describe that travel has always been important for her, and something she budgets for. Brett interjected that she didn’t have a budget and didn’t know how to budget.  Olivia told Pastor Cal that she had asked Brett to help her with a budget to work down her debt.

His savings could put a damper on their love

The conversation soon devolved into comparing incomes and expectations.  The hurt feelings began when Olivia didn’t like Brett’s house all that much.  He is proud of his habit for saving and investing in his home and called the money for excursions “throwing money away.” If only this Married at First Sight groom could invest the same attention to faithfulness in this experiment, he might discover that long-term love beats any Saturday night score. Reports are that a fan has already seen the “Serial Dater” back on a dating app.

Pastor Cal urges the couple to see that finances speak to priorities and how important it is to discuss the problems clearly without thinking that a partner is the enemy.  When Brett goes back to the fact that he can’t afford his wife’s level of travel luxury, Olivia breaks down in tears.  She explains how she “never wanted to say I didn’t try” in her Married at First Sight union. Brett tries to create a camera-ready moment by bringing tissues for her tears.  Fans know already where this match is headed and who has made the investment. Cats alone can’t build a lasting love between people.

Miles has some playful fun with his bride’s lingerie and lotions when they visit her place. She can’t stop treating her husband like a dinner guest.  She accuses him of “misbehaving” but the two do bond over shoes. They could be in competition for the most pairs.

Karen is not too tough on her Married at First Sight hubby for the messiness at his place.  The tough part for her is opening herself to any relationship at all.  She reiterates to Pastor Cal that she hasn’t ever lived with a man or hardly had any roommates in years.  The sting of the unfaithfulness from her former long-term relationship still sends tears down her cheeks.

Pastor Cal tells her that she was matched with a man “who has a heart as big as Louisiana,” but she is scared of his simple overtures of affection.  “I’ve seen that before,” she relates. All love is a risk, just like life itself, and pain comes with the process.  It’s sad to see this potential “power couple” abandon the opportunity because of not even taking a real Married at First Sight chance.  Miles made it clear that his patience will have an expiration date on close connection.  Eternity at arm’s length is not an option for him.

Henry gets in a party mood on move-in day

While Henry and Christina share some of the most awkward pauses in the history of conversation, they are also a riot as they navigate not being with their typical type. Pastor Cal makes exactly that point when he explains why the match was made.  The Married at First Sight mentor is just as frustrated as everyone else that the couple hasn’t hit any of the marriage milestones other than taking their vows, and yes, one kiss.

Roberson assures Henry that if he makes a move, Christina will respond.  Her eyes say it all in that moment.  Every Married at First Sight fan has been screaming at the small screen for something  to spark this couple for weeks. They have the potential. If only the right nudge comes in time.

Henry did get a little loose on move-in day, telling his bride that he’ll tell her if he has any parties while she’s out of town.  he wine always helps and Henry promises that Christina is invited “when you’re in town.”

Henry has a hard time accepting that his flight attendant wife stores all her possessions in her car.  She wants his car to share the load now.  This match is the Lucy and Ricky of Married at First Sight.  Christina doesn’t want be in the show– she just wants a grab and a kiss. It’s a bumpy ride outside the comfort zone.  Still, this journey could be fun to follow.  Henry might not be making so many trips to Mama’s once he tries Christina’s baked goodies.

Storms roll in for the newlyweds next week on Married at First Sight and TV Shows Ace will have all the news.