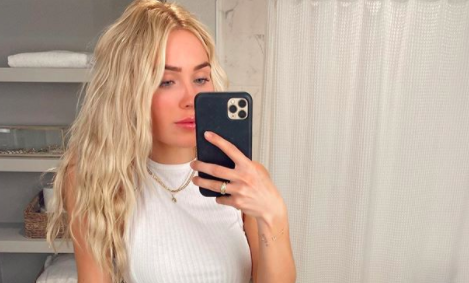 Cassie Randolph and Colton Underwood were in a pretty serious relationship post Bachelor, however they broke up. Rumors started swirling that she and Brighton Reinhardt are dating. However, he is clearing those rumors up now.

Is Cassie Randolph dating anyone?

Rumors were flying that Cassie Randolph was dating Brighton Reinhardt after her relationship with Colton Underwood ended earlier this year. According to Us Weekly though, Brighton says that these rumors are not true. Apparently, the pair have actually been friends for a while so they are definitely not dating.

“Cassie and I are just friends and have been for over four or so years,” Brighton says. “My brothers and I are all close with Cassie and her whole family,” he revealed.

This doesn’t come as a huge surprise, that they are just friends. It seems like Cassie was still pretty torn up when she was interviewed on The Bachelor: Greatest Seasons — Ever!. She really didn’t want to talk about Colton Underwood. It seemed like she may not be over that yet. It may be too soon for her to get into a relationship with someone new.

Getting readyyy for the night 💃🏼 One of my favorite ways to style my hair using @bondiboost wave wand! Check my story to see how-to #boostyourroots #bondiboost

Colton Underwood and Cassie split up a few months ago. Since then, it seems like they have been a bit hostile towards each other. It all started when Cassie tried to remain quiet about the breakup on TV, however Colton didn’t think she did.

“When our relationship ended we agreed to handle things as privately as possible as we attempted to navigate our new relationship as friends,” Colton said on Instagram after her episode aired. “I chose to do that since we were living in this interim period, but obviously a lot changed this week.”

Cassie came back saying that she tried to remain quiet, however she thinks he will be monetizing their breakup in his book US Weekly says. Of course, Colton says thats not true, but what else would they say?

Honestly, it seemed like their relationship would remain quiet, however things have gotten kind of intense. Hopefully they are able to move on and both find love with someone else.

Did you like Colton Underwood and Cassie Randolph together? Did you want Cassie and Brighton to date? Let us know what you think in the comments below. Come back to TV Shows Ace for more news on all of your favorite Reality TV stars.